A cottage was built on Lot 84 by the mid 1860s and in 1869 Mrs Winifred Maloney paid rates on the house and allotment. John Atkinson (1859-1911), son of Robert Atkinson, purchased 44 High Street (Lot 84) in 1885 and established a general store, bake-house and residence in 1886 and opened business with Mr G. Carr as baker. A docket from December 1889 stated that the store sold a good assortment of drapery, groceries, ironmongery, crockery and tinware.

Robert Fish Atkinson (1857-1922). another son of Robert Atkinson, joined the firm in 1897 and added an auctioneering business in 1901. He was a chairman of the District Council of Willunga. Robert’s sons, Thomas and Frank, continued this well-known business.

Bread and other provisions were delivered throughout the Willunga area by Atkinson’s horse and cart, then by car, carrying welcome news to outlying families.

The bakery and its owner were a source of great interest for local children: Mr Atkinson was a wise and kind man who knew everything that was going on in the district, and he helped my Mother and we children in lots of ways while my Father was in France with the 1st AIF. Mr Atkinson had a peculiarity - he was never seen without a hat on, in the house or out; some said he wore it in bed, but I think that would be stretching it a bit. We boys loved to go into the bakehouse and watch them pour bags of flour into long wooden troughs, and then make it into dough by mixing it with water and other ingredients, no mechanical mixers then. The men wore short sleeved shirts with the sleeves cut off right up to their shoulders, and they would reach right down a metre deep, and keep on working the dough till it was ready to be rolled out in long rolls and chopped off to loaf-sized lumps of dough. They had a flat wooden plate with a long handle attached; the plate would be sprinkled lightly with flour, a lump of dough placed on it, and they would push it right to the back of the oven, give it a quick flip, and leave the dough sitting in the oven. This would go on hundreds of times till the oven was full. The old oven had been in use for many years and the division between the fire base and the bread department had burnt out in several places. When the bread was almost ready to be taken from the oven, almost invariably some of the loaves would catch fire. The wooden plate would then be brought into service again, this time with a kerosene tin cut in halves length wise and half filled with water, they would push it in, give it a flip, and splash water on the burning bread. It sounds pretty primitive, but that’s the way it was day after day. Anyway, we all enjoyed the bread that wasn’t burnt, and it didn’t cost very much then. Of course I shouldn’t tell you about the odd mouse that fell out of the bags of flour as it was emptied into the troughs, they were usually despatched by a whack from someone’s hand. What’s a little drop of blood in a great mass of flour like that?

The bakery and store business closed with the retirement of Thomas Atkinson in 1967.

The present owners (J Keyte and partner) purchased the property from Hazel Atkinson in 1977. They restored the building, lived in the residence and, from 1980-1986, ran Willunga Studio gallery in the shop section. The shop then became the base for their Adze Character design business. In 2020 the shop is leased by Terre Café. The counter in the café was rescued after being discarded from Goode's Store when it closed in 1967.

In all exterior details, the building appears in original condition, including a typical decorative parapet, massive timber verandah posts and picket fence in front of the residence. It is an almost perfect street-scape of a late nineteenth century store. 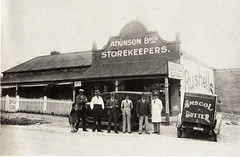 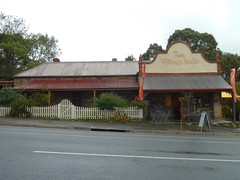 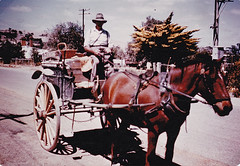 Gina Marie remembers: I remember staying at Aunty Hazel's [Atkinson] here - she had a high bed in the front room with ballerina photos. A light that had a long cord over the bed so you could turn it off from the bed. She always cut my toast into threes - I have a photo of her holding me in her arms outside the front of here circu 1967.

Do you remember Atkinson's Bakery 44 High Street ? Then Join up and add your memory here.

This page was last modified on 2 August 2020, at 14:13.Text on this site is available under the Creative Commons Attributions/Share Alike licence; additional terms may also apply. See our Terms of Use.
About Now and Then | Places | People | Events | Organisations | Things | Contact us