During the eighteen years he is believed to have lived in Port Pirie (1877-1896) He is recorded as having played in the first football team at Solomontown (Port Pirie) in 1877. He is listed in the South Australian Directory of 1893 as a clerk and living in Solomontown, Port Pirie. He placed entries in the category of poultry, birds and game at the Port Pirie Show in October 1888 and served on the committee of the Port Pirie Agricultural Show in 1893. He was listed as the starter in North-Western Jockey Club race meetings between 1889 and 1894. In 1892-3 he was the owner of a bay gelding, Fleet, entered in races at the North-Western Jockey Club, Warnertown, Laura and Redhill. He was also active in local government as the auditor for the Port Pirie Town Council elections in between 1891 and 1895. He was Secretary of the Port Pirie Mining and Prospecting Company in Sep-Oct 1895. A farewell social was given at the Royal Exchange Hotel in Port Pirie on Friday 20 March 1896 by the Australian Order of Foresters (A.O.F.) for R.F. Atkinson “who intends leaving here shortly to join his brother in business”. When he left Port Pirie it was mentioned that he had for some years been the chief clerk at Messrs. H.A and W. Goode, a storekeeping business with Willunga connections.

In 1896 Robert Fish Atkinson purchased a half share in the business at 44 High Street from Thomas Aldam Atkinson and then in 1907 he bought the other half share from his brother John Atkinson. He owned the business until his death in 1922.

By Feb 1898 Robert Fish had largely reestablished himself at Willunga. In that year he put in entries to the Willunga Agricultural Show categories of pigs, ducks and vegetables, in 1906 he entered in the category of baker’s bread and in 1909 he was on the Show committee. He later entered poultry and became a judge in the produce category at the Mt. Compass Show. He returned to many of the activities that he had undertaken in Port Pirie such as becoming the starter at the Noarlunge races in 1900 and his horse named Bodalla won races at Yankalilla, Meadows and the Onkaparinga races from 1901. In July 1900 he was elected a councilor for the Willunga ward and later became Chairman of the Willunga District Council, where he served for many years. He is listed in the South Australian Directory of 1900 as a storekeeper and living in Willunga. He was successful in a government tender (he paid 2 pounds 10 shillings) to collect the tolls from the Port Willunga Jetty for 1900. In 1909 he gave evidence before the “Proposed Southern Railway Commission” at Willunga where he was described as an “auctioneer and storekeeper”. 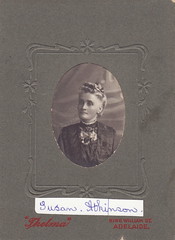 Do you remember Atkinson, Robert Fish ? Then Join up and add your memory here.

This page was last modified on 30 August 2021, at 11:29.Text on this site is available under the Creative Commons Attributions/Share Alike licence; additional terms may also apply. See our Terms of Use.
About Now and Then | Places | People | Events | Organisations | Things | Contact us