Thomas Atkinson was born on 8 July 1822 at Waddingham, and baptized in St. Mary Church on 3 August, in Lincolnshire, England. Religion - Church of England. He was the third surviving son of Robert Atkinson (1774-1832) and Susanna(h) Fish (1788-1832) of Hayes Farm, Smitherby, Lincolnshire. He was 9 years old when his parents died in 1832 and his older brother William Atkinson (1814-1840) took over the farm. The four Atkinson brothers (William, Robert, Thomas and Joseph) and their sisters Bridget and Susanna, some with their families, travelled to South Australia on board Singapore from London. They arrived at Holdfast Bay on 12 November 1839, Thomas was then aged 17 years.

The Atkinson brothers built the first hotel (“Lincolnshire House” later Old Bush Inn) on lots 6 and 7 in the township of Willunga in Dec 1839. Thomas and his brother Joseph jointly purchased eighty acres (Lot 235) for 80 pounds and one shilling in the Government Land Sale in 1847. Thomas occupied land in the Willunga district, which he named Ashley Farm, from the early 1840s. Thomas purchased lot 33 in St Luke Street in the township of Willunga from Henry Johnson on 25 August 1846. Council records in 1850 indicate that he was the owner or occupier of 240 acres of land comprising of sections 263, 264 and 701. Thomas also purchased 74 acres in section 746 south-west of the township of Willunga for 87 pounds on 23 May 1855 and he owned land at Glenelg. He sold some land to the Anglican Church for the new St. Stephen’s Church (built in 1884). In addition to his land holdings and his activities as a farmer and pastoralist, he was also one of seven founding shareholders in the Willunga Flax Company in 1869.

Thomas was very active in the community and in public life. He was a member of the Willunga Road Board, which subsequently became the Willunga District Council, for 28 consecutive years. In 1878 he was elected to Parliament serving two terms as the representative for Noarlunga (1878-1887) where he was nicknamed "the silent member" as he was not a public speaker and rarely contributed to debate. In 1860 Thomas was appointed by Governor MacDonnell as Captain of the Willunga Rifle Volunteers and later in 1893 he became honorary captain of the Mounted Volunteer Force. Thomas was an active member of the Willunga and district Agricultural and Horticultural Society and, as the president of that Society, he laid the foundation stone for the Agricultural Show Hall built in 1890. He was on the School Board of Advice. Aged 84 years, Thomas died on 15 Oct 1906 and he is buried in St. Stephen’s Anglican cemetery at Willunga. 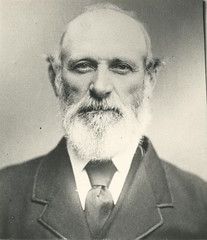 Do you remember Atkinson, Thomas ? Then Join up and add your memory here.

This page was last modified on 25 September 2016, at 21:26.Text on this site is available under the Creative Commons Attributions/Share Alike licence; additional terms may also apply. See our Terms of Use.
About Now and Then | Places | People | Events | Organisations | Things | Contact us