…we noticed a large collection of ornamental writing, the work of Mr. Bassett's scholars, and a large magic square, which excited considerable admiration, was exhibited by Mr. Bassett. SA Chronicle and Weekly Mail 20 March 1869, page 7.

Exhibitions at Willunga Shows were varied and extensive, including objects displayed by both adults and children. They ranged from the usual livestock and farm produce to slate carving, wicker-work, preserves, meat and agricultural implements. Historian Rob Linn commented that Although the churches were both social and spiritual centres for the community, the main event for the district every year was not a religious festival…but the local agricultural and horticultural Show. 1

As the master of Willunga’s popular Bassett Schoolroom, it is appropriate that James Bassett would have encouraged his students’ efforts by entering them in the show. Student entries of writing, needlework, maps and pattern work are all noted in press reports of the shows.

Ornamental writing was an extension of the curriculum at a time when neat, legible handwriting was of great importance for people carrying out business and when decorative writing enriched illuminated addresses, diaries, scrapbooks and cards. Name cards and autograph books were two fads of the day, and a young person worked toward becoming proficient enough to make the flourishes and curlicues that would add uniqueness and elegance to his handwriting. Also, since a person's signature on a document was considered a mark of distinction, great pains were taken to develop an artistic and original one. 2

In ancient times, Magic Squares were significant in China, the Arab world and India, later becoming puzzles and objects of mathematical study in the western world. Bassett probably used simple squares in his school for the students to learn about number relationships and manipulation. In his leisure time, he competed with a Mr Callow via the pages of The Register newspaper, creating incredibly large and complex squares. In the 1870s, he exhibited a monster Magic Square at a Willunga Show.

The Willunga Show had begun in 1856 and, in the 1860s, exhibits were held in the Oddfellows Hall, with animal competitions on the adjoining land. The Southern Argus reported that people came from the whole of the southern areas to the show in 1866 to view the animals, produce, poultry and wine competitions. Sixpence was charged for entry to view the exhibitions in the hall. 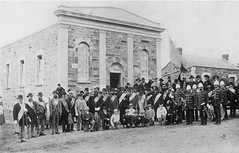 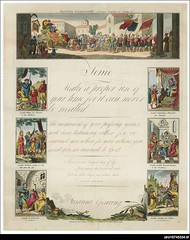 Do you remember Bassett exhibitions at Willunga Show ? Then Join up and add your memory here.

This page was last modified on 20 March 2017, at 16:41.Text on this site is available under the Creative Commons Attributions/Share Alike licence; additional terms may also apply. See our Terms of Use.
About Now and Then | Places | People | Events | Organisations | Things | Contact us