She was born on 7 November 1925, the youngest of four children of Martin Henry Binney and Mary Elizabeth Couchman. She was born and lived in her parent's home on their farm on Gaffney Road near Willunga, before they moved to Binney Rd.

Ruth attended the Willunga Public School from 1931 to 1938, walking there with her older brother Lloyd, often taking a shortcut along the railway line. After leaving school at the age of thirteen Ruth was apprenticed to dress-maker Isabel Whibley in McLaren Vale. But times were hard and after her father died in mid-1939 she went to work at Goode’s General Store in Willunga.

Ruth married Alec Baxendale in October 1946 when they moved in to their property 'Wigley's' on McMurtrie Road where she lived until 2013. Ruth and Alec had three children: Sally, Jim and Anne.

Ruth was involved with many school and community groups. Her community involvement initially reflected her role as the mother of young children. She was President of the Auxiliary at McLaren Vale Primary School, then President of the Mothers' Club of Willunga High School, She was involved with the Girl Guides movement and became President of the Southern Association. Later, Ruth was a Meals On Wheels volunteer, a member of the Penguin Club, the Zonta Club and the Probus Club and worked on the Fair Day Committee for the Southern Districts Memorial Hopsital. She captained the Womens' Golf Club at Willunga in the early 1980s.

Ruth was also an energetic worker for the McLaren Vale Rotary Club, especially supporting her husband Alec when he was President and playing host to numerous exchange students. The Rotary Club honoured her with the Paul Harris Fellowship for services to the community.

Ruth joined the Willunga Branch of the National Trust of SA when it was formed in 1968. She remained a member for 46 years and, in 2000, completed 21 years as Chair of the Branch. Highlights included the opening of the Court House Museum in 1970, the opening of the restored Stables in 1975, the restoration of the Bassett Boys Schoolroom in 1988 (assisted by the local Probus Club) and the Star of Greece Centenary commemorations in 1988. Numerous historical publications have been based directly on her research, including the McLaren Vale Heritage Trail, the Willunga Walks booklet and the Heritage Reports commissioned by Willunga District Council and the Noarlunga Council both of which she assisted via their Heritage Advisory Committees. She also helped innumerable authors and family historians in their search for information about their particular areas of interest.

In 1995, Ruth was named Citizen of the Year by the District Council of Willunga. On Australia Day 2000 she was awarded the Medal of the Order of Australia for ‘the preservation of local and family history and heritage sites in the Willunga and McLaren Vale areas’. In 2007 she received the Dr. Mildred Moccatta Award for her exceptional voluntary contribution to the National Trust in SA.

Ruth’s hard work and commitment to local history were legendary – to her it was simply a pleasure to help people and to share her enthusiasm for the heritage of our district.

Alec Baxendale died in July 2006. Ruth continued to live on their property before moving to Aldinga. She died in June 2015 and is buried at Strout Cemetery, Willunga. 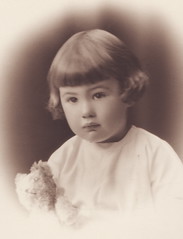 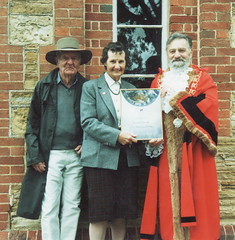 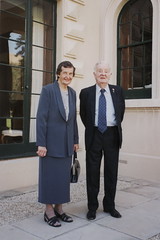 Do you remember Baxendale (nee Binney), Ruth OAM ? Then Join up and add your memory here.

This page was last modified on 3 December 2020, at 14:45.Text on this site is available under the Creative Commons Attributions/Share Alike licence; additional terms may also apply. See our Terms of Use.
About Now and Then | Places | People | Events | Organisations | Things | Contact us