Father Bongaerts arrived in South Australia in 1863, and spent some time in Adelaide learning English. In 1866/7, he arrived in Willunga. Father Bongaerts made a significant difference to Willunga Catholics by inviting the Sisters of St Joseph into his parish, which dramatically improved the standard of the children’s education. He organised the construction of a parish school (now St Joseph's Hall)]] and engaged in fundraising to clear debts raised by capital works. A significant occasion for Catholics was the street procession through the streets of Willunga organised by Fr. Bongaerts and the Sisters to mark a Catholic holy day in 1868. Together, the Sisters and Fr. Bongaerts encouraged Willunga Catholics to renew their faith and to celebrate it. Fr Bongaerts reputedly supported the Sisters of St Joseph and Mary MacKillop at some personal cost during their conflict with the Church hierarchy. (http://www.daaag.org/node/18)

Fr. Bongaerts was replaced by Fr. Kennedy in 1870. He worked at various parishes until overtaken by illness while at the Parish of St Peter and St Paul in Gawler. He died from intestinal cancer on 20 January 1875 at the Mission House in Gawler. According to a Gawler newspaper “… by his earnestness in the cause of religion and charity and general good temper and generosity [Father Bongaerts] had raised himself to a high place in the opinion of every inhabitant of Gawler.”(The Bunyip - Gawler, 22 January 1875). The Catholic newspaper “The Harp” (22/1/1875, p. 7) described Fr Bongaerts as “one of the most zealous and hardworking priests in South Australia.”

Father Bongaerts is buried at the West Terrace Cemetery. 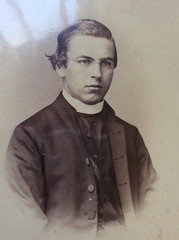 Do you remember Bongaerts, Theodore (Rev.) ? Then Join up and add your memory here.

This page was last modified on 12 April 2019, at 20:35.Text on this site is available under the Creative Commons Attributions/Share Alike licence; additional terms may also apply. See our Terms of Use.
About Now and Then | Places | People | Events | Organisations | Things | Contact us