John Stacy Brown’s father was a farmer and the family initially settled on a property called Exmouth Farm between Willunga and Meadows. In 1843 they had 7 acres of wheat, 4 acres of barley, a ¼ acre garden, 400 sheep, 16 cattle and 1 pig. By about 1850 the Brown family had moved to more productive land at Monapilla on the top of the Range halfway between McLaren Vale and Willunga.

John Stacy Brown married cousin Sarah Jane Stacy at McLaren Vale in 1854 and the newlyweds settled on their farm Springbrook, on Section 706 on Edwards Road, so named because of a small perpetual creek on the property. Sarah Jane had arrived in SA with her parents James Smyth Stacy and Elizabeth in the Anna Maria in 1849 [Note 1]. Prior to her marriage she lived with relatives on the Stacy family farm Waybrook on Edwards Rd.

John Stacy Brown and his wife Sarah Jane were farmers who were well known throughout the Willunga and McLaren Vale district. They continued the Brown family’s involvement with the newly formed Congregational Chapel at McLaren Vale, built in 1844. On May 15th 1860, shortly before the laying of the foundation stone for the second larger Church, John Stacy Brown was elected as a Trustee of the Church, along with Charles and George Manning, Thomas Colton and Henry Scotcher, among others.

John Stacy Brown was a supporter of Tsong Gyaiou, the private school in McLaren Vale founded by Mary Ann Aldersey. When she died in 1868, he was one of the named dignitaries who followed her coffin to its final resting place in the Congregational Cemetery. His youngest daughter Florence was a weekly boarder at Tsong Gyiaou during the 1880s. (His son John Stacy Brown (Junior) later bought the school property and lived there for a few years in the early 1900s).

John Stacy Brown died on 18th November 1882, at his home at Springbrook Farm, McLaren Vale, aged 54 years. He was buried in the McLaren Vale Congregational cemetery, as were his parents before him.

Sarah Jane Brown continued to live on the Springbrook property which was farmed jointly by her three sons. She died at home on 9 May 1906, aged 72 years. She too was buried in the McLaren Vale Congregational cemetery.

Springbrook Farm was then run by John and Sarah’s son Walter Henry Brown and his wife Alice who had married in 1904. Then followed her grand-daughter Rita and her husband Frank Bald until the mid-1980s. The Cawte family purchased Springbrook in the late 1980s. 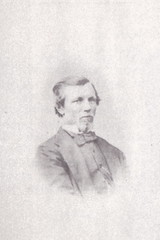 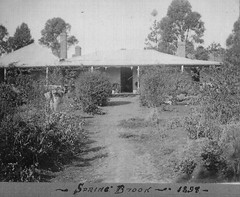 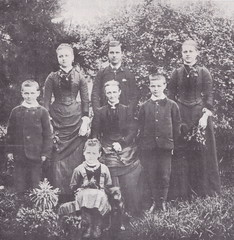 Sarah Jane Brown and six of her children, c 1885 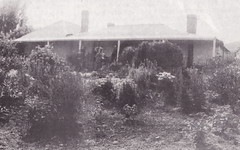 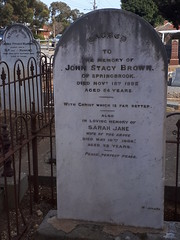 This page was last modified on 22 September 2020, at 16:52.Text on this site is available under the Creative Commons Attributions/Share Alike licence; additional terms may also apply. See our Terms of Use.
About Now and Then | Places | People | Events | Organisations | Things | Contact us