Born in 1873, Walter Brown was the youngest son of Sarah Jane and John Stacy Brown, the original owners of Springbrook farm, on Section 706 near the corner of Binney Road and Edwards Road.

In 1892, ten years after the death of his father, he joined his two brothers in the management of the Springbrook estate.

In 1904, he married Alice Emily Strout, who was born on 3 August 1879, the eldest daughter of Samuel Strout, a farmer of McLaren Vale, and his wife Eliza (nee Elliott).

Walter and Alice lived at Springbrook all their lives. A low stone wall is all that now remains of the original home.

Daughter, Joyce’s, school shoes were donated many years later to the Willunga Courthouse Museum, to be displayed as an interesting example of the skill of local boot-maker, Ted Hockney. Their youngest daughter, Rita Bald, kept diaries of her daily life on Springbrook farm from 1930 to 1978. They were donated to Willunga Courthouse Museum in 2020. Rita's husband Frank was a horse breeder who rode in many local races and gymkhanas. Rita died on 26 April 1984, aged 71, and is buried in Strout Cemetery. Frank died at Quorn on 9 September 2008, aged 85.

Walter Brown was a member of the Willunga Agricultural Bureau. He was also a founding member of the Willunga Rifle Club, formed in 1899 under the leadership of Captain Charles Lipson. He was interested in local affairs and nominated several times as Councillor for the McLaren Vale Ward of the District Council of Willunga, without success.

Walter Henry Brown died at his residence Springbrook, McLaren Vale, on 5 September 1924, aged 50 years. He was buried in the Strout Road Cemetery. Probate was granted on an estate of £3,250. 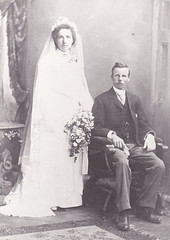 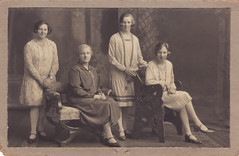 Alice Brown with daughters from left: Rita, Joyce and Gwen. 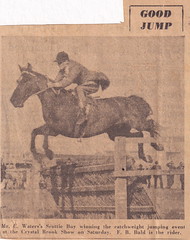 Do you remember Brown, Walter Henry ? Then Join up and add your memory here.

This page was last modified on 26 October 2020, at 15:30.Text on this site is available under the Creative Commons Attributions/Share Alike licence; additional terms may also apply. See our Terms of Use.
About Now and Then | Places | People | Events | Organisations | Things | Contact us