At a late hour on Friday Norman Wilfred Baker, who left his home near Willunga on Monday on a bushranging career, has not been captured. The mounted constables and the black-tracker are continuing their search for the lad, and were yesterday joined by Sergeant Lyons, of Strathalbyn.

Residents of the surrounding districts are much concerned about Baker, who is known to most of them. Many rumours regarding his doings are in circulation. It was stated that he had had shots at a passing motor car a few miles from Willunga,and had smashed the glass windscreen. Another report at McLaren Vale was that the lad had held up a girl on a road near Kangarilla. No confirmation of these tales, however, have been received by the police, who are now working on Mr. Norman Brookman's property, about 10miles from Willunga, on the way to Meadows.

After deciding to go to Blackfellow's Creek on Thursday afternoon the police party changed their plans, in consequence of a report that Mr. Michael Clarke's camp, which is on Mr.Norman Brookman's property, immediately adjoining the Kuitpo Forest, had been raided. It was ascertained that blankets and a quantity of provisions were stolen. The conclusion was that it was the work of the boy bushranger, although it was done between 4p.m. and 7p.m. At day-break Mounted Constables Klar, Hoffman, and Mc-Elroy, and Blacktracker McLean took up the new clue, and were later joined by Mounted Constables Wegener ,Redpath, and Walsh. A short distance from Mr. Clarke's camp the blankets were discovered in the scrub, made up into a swag and abandoned, but the youth was not to be found. It is considered that he cannot be far away, but in such country the police will have great difficulty in tracing him, especially if he becomes aware that they are close at hand.

Young Baker has an intimate knowledge of the country. Apart from the scrub and the hilly nature of the district, there are swampy parts. A resident stated on Friday that the boy knew every inch of it, and could lead the police a merry dance. His greatest difficulty will be in securing food and warmth at night. Since his ill-considered venture began the weather has been fairly fine, although chilly after sun set. The task of the mounted men is not an easy one, and some of them are feeling the strain of the continuous search, which has been in progress since Baker bailed up Mr.deCaux at about 11-30a.m. on Tuesday.

The Boy Bushranger, Arrested At His Home,

In bed at the time.

Lying peacefully in bed at his father's home, seven miles from Willunga, Norman Wilfred Baker, the 15 year old bushranger, was taken into custody by Mounted Constables Wegener, McElroy, and Walsh at 9-35p.m. on Friday. He was escorted to the township, where the party arrived at 3a.m. on Saturday. It appears that the boy visited his home during Friday afternoon and left behind a blanket and one of the rifles he had taken from there. When his father returned and noticed these things he went for the police, who, on arrival at the lonely homestead, found the lad in bed. He offered no resistance.

Baker is alleged to have stated that he had had a "pretty active time". He said he had held up only one man, but had intended in the course of a day or so to get on the roads again and bail up a few more. 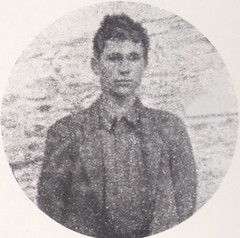 Memories of Capture Of Bushranger

Do you remember Capture Of Bushranger ? Then Join up and add your memory here.

This page was last modified on 13 June 2020, at 16:14.Text on this site is available under the Creative Commons Attributions/Share Alike licence; additional terms may also apply. See our Terms of Use.
About Now and Then | Places | People | Events | Organisations | Things | Contact us