Fr Caldwell, the first resident priest, noted that the area in front of St Joseph's Catholic Church was used in the 1840s for burials, before the Catholic Church owned the land. Members of the parish Sesqui-centenary committee in 2001 invited the University of Adelaide to study this area and a burial was found. After examination, the remains were returned to Willunga in 2005 and reburied within the cemetery.

Although the cemetery existed in 1850 when the church was built, Father Caldwell, the first resident priest (April 1850), noted that the cemetery was not consecrated and that during his time the graves were merely blessed.

Fr Peter Hughes, resident priest from 1853, began the Registers for the Willunga Catholic Parish. Marriages and Burials are recorded from 1854 and Births and Baptisms from 1853. Bishop Murphy came to Willunga to perform a confirmation ceremony and to consecrate the cemetery in 1855.

Twenty burials are recorded in the burial register between 1854 and 1860 and, of these, ½ were 5 years old or younger and ¼ were 19 or 20 years old. Most people buried during this period had arrived as immigrants since 1850 and were farmers, labourers, boot-makers and housekeepers and their families.

Michael Kenny, born on 24 August 1853 is the first birth and baptism recorded in the registers and, sadly, is also the first death recorded. Thomas and Catherine Kenny lost their little son at 8 months of age, buried 1st May 1854.

The earliest remaining marked burial in the cemetery is Ellen Stephens, wife of Daniel Stephens, an agricultural labourer who, in 1854, arrived in Adelaide from England. They had married in St Joseph’s church in 1855, and had 6 children. Ellen died 2 ½ weeks after the birth of her last child, Henry, and he died at 10 weeks of age. Her slate headstone was made and signed by William Hawken, one of the slate carvers who made headstones in Willunga at the time.

Windows that commemorate the dead are another form of memorial. In the church, dedications form part of each window’s design and, in many instances, link with graves in the cemetery. Additionally, several statues, the baptismal and holy water fonts and even the pews have been dedicated as memorials. 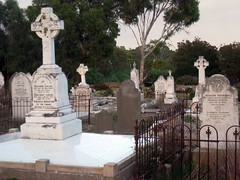 Do you remember Catholic Cemetery ? Then Join up and add your memory here.

This page was last modified on 12 April 2019, at 20:14.Text on this site is available under the Creative Commons Attributions/Share Alike licence; additional terms may also apply. See our Terms of Use.
About Now and Then | Places | People | Events | Organisations | Things | Contact us