William was a quarryman and worked in the slate quarries until he went to Victoria for the Gold Rush for a few months in 1852. On his return from the Gold Rush, William purchased land and became a farmer in the Willunga District. He paid rates on sections 610 and 611 located at Sellicks Hill from 1853 to 1876 as well as section 607 and 614 (owned by Thomas Martin) from the 1860s to 1876. When he retired he settled in Willunga 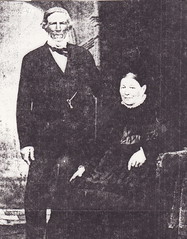 William and Elizabeth Chenoweth, circa 1884

Do you remember Chenoweth, William ? Then Join up and add your memory here.

This page was last modified on 21 January 2021, at 10:40.Text on this site is available under the Creative Commons Attributions/Share Alike licence; additional terms may also apply. See our Terms of Use.
About Now and Then | Places | People | Events | Organisations | Things | Contact us