By 1893 the press reported that there are five churches and three public-houses in Willunga. On Sundays the population turn out in their best attire—plug hats, black coats and pants, new bonnets, bright skirts, and all the rest of it. (Quiz and the Lantern Fri 4 Aug 1893 p13).

Religion was one of the most powerful forces within British colonial culture in South Australia; it framed people’s attitudes about the land, towns, society and their own lives [and] added a vital component to the area’s community and social life… [In Willunga] in 1844, before the major influx of Cornish miners and their families, the religious affiliations of the people showed a decided trend towards Anglicanism – the Church of England claimed 52.7% of the people. The percentage for each of the other denominations was much smaller: Roman Catholics…Wesleyan Methodists… ‘Other Protestant Dissenters’…and Church of Scotland. By 1855, Congregationalist (Independents and Baptists), Presbyterian Free Church, other Presbyterian, Lutherans, Society of Friends and ‘religion not specified’ had joined them. (Linn 1991 pp 45, 47)

Initially religious services, sometimes led by family members, took place in homes or in meeting places, with people travelling long distances to participate. The Church [of Christ] met at noon and the meeting generally concluded about 3 o'clock. Some of the people came ten or twelve miles to attend. At the close of the meetings held in John Watson's home, the men smoked while the dinner was being prepared. John Aird who had taken such a leading role in the church since its commencement could read printed matter but could not write longhand, so the notes and headings of his discourses he would print in Roman characters as he found them in his Bible. (Lawrie 2016 Chapter 7)

Church buildings in the Willunga area were amongst the earliest built in the colony and were basic structures with plain furnishings. Partly due to the exodus of men to the goldfields, the Catholic Church, built in 1850, was not alone in its unfinished state in 1855, not plastered or flagged and [with] no Altar…The Presbytery consisted merely of the lean-too [sic] consisting of 2 rooms, unplastered and the roof leaking. The ground was full of holes. (Condon)

Music and singing were features of church life. At the Wesleyan Church, I felt sure they must be angels singing such bright, beautiful hymns…The people who sang those hymns the best were the Cornish people who lived up Beltunga way - among the slate quarries. There was Hette Sibly, whose voice was so powerful that I fancied it must surely reach to heaven. She could carry along a choir all right. (Chronicle Feb 23, 1942 p27)

The archives of the Churches provide a glimpse of the commitment involved in running these communities and of a lively social life. The Anglican and Uniting Church records speak of Building funds, the Band of Hope, Sunday Schools, Community picnics and teas, Public lectures, the Sunshine Guild, the Ladies’ Guild, the Ladies’ and Men’s Fellowships, and the Young Peoples’ Society of Christian Endeavour. And of course there was the ever present need to raise funds - for organs, furniture, a library, charitable causes and buildings. (SRG 94/M71, SRG 198/28)

In the 1950s a local historian remembered them and their poke bonnets, crinolined dresses, black and paisley shawls and the men going to Church in black suits and tall bell-toppers. How dignified and reverent they all were. (Aldam 1954 Willunga National Trust) 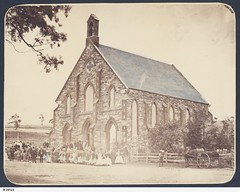 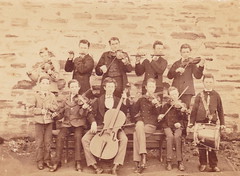 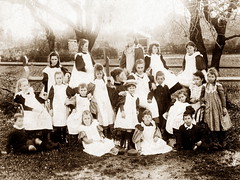 Pupils from the Church of England Day School, Willunga, ca 1896.

Memories of Church life in Willunga

Do you remember Church life in Willunga ? Then Join up and add your memory here.

This page was last modified on 3 May 2020, at 18:01.Text on this site is available under the Creative Commons Attributions/Share Alike licence; additional terms may also apply. See our Terms of Use.
About Now and Then | Places | People | Events | Organisations | Things | Contact us