Built by the Church of Christ and opened as a place of worship on 11 December 1870.

Philip Santo, Henry Earl and Dr S Kidner took part in the opening services at which chapel and vestries overflowed with the crowd that gathered. The building was said to be able to seat 250 people. (It is rumoured that that a sloping floor was installed to prevent people from dancing, but more likely, if the slope ever existed, it was designed to focus attention on the immersion baptismal font at the front).

Numbers slowly dwindled from 53 members in 1869 to only 17 in 1903. Several ‘revival’ missions were held without success. George Eden was a regular worshiper at the Church from 1888 until his death in 1934. As the only remaining member of the congregation he would open the Church door every Sunday morning and sit for a while and worship alone. He became known as “Old Fidelity”.

Although no longer used for church services, the building remained the property of the Church of Christ. During 1943-45 it housed the Prisoner of War Control Centre for hundreds of Italian internees who worked on farms in the district during World War II. From this administrative centre regular visits were made to check on the internees and to deliver special supplies, such as pasts and spaghetti, not readily obtainable in local shops.

The Willunga CWA Rest Room opened here in July 1948 after much refurbishment. (Rent was foregone in return for payment of the electricity bills). On opening day “the hall was gaily bedecked with troughs and tubs of massed arum lilies, tall green foliage and contrasting scarlet blooms that toned with wall vases, bright with coning rosebuds, all adding to the exotic garden scene”. The Red Cross branch met here for many years and the hall was also available for other community groups and classes.

In 1961 the Masonic Lodge bought the building from the Church of Christ for £650. After renovations (including painting the ceiling blue) and completing various Lodge protocols, the Willunga Masonic Lodge No. 215 was consecrated here in 30 October 1964, under Foundation Master Eric Lacey. The Lodge closed in 1991.

The building then came under private ownership. A new slate roof was added in approximately 2003. The Blue Doors Studio was opened around 2004 providing dance classes and space for other community activities. A change of ownership occurred in 2013 with the hall’s community function likely to remain.

The hall and the original stone outhouse (with slate roof and double, timber toilet seats) are heritage-listed. 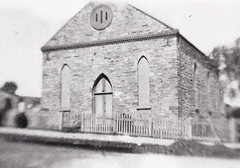 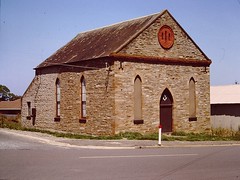 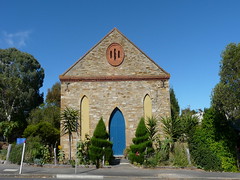 Do you remember Church of Christ 38 High Street ? Then Join up and add your memory here.

This page was last modified on 20 May 2014, at 09:14.Text on this site is available under the Creative Commons Attributions/Share Alike licence; additional terms may also apply. See our Terms of Use.
About Now and Then | Places | People | Events | Organisations | Things | Contact us