Born at Wattle Flat, near Yankalilla, on November 27, 1873, Superintendent John Clarke served three years in a mounted rifle company at Yankalilla before he joined the police force on August 1, 1897. After a short period in Adelaide, he was transferred to Port Augusta, where he married Elizabeth O’Flaherty on 14 October 1901. The couple had two children:

John was then stationed at Marree, Mannahill, Paringa, Brighton and Willunga.

John Clarke was stationed at Willunga as a Mounted Constable from January 30, 1912 to May 2, 1918. Sadly, his parents Matthew and Julia Clarke were killed in July 1914 when their stone hut at Wattle Flat caught on fire. Finger marks on the wall showed that his father had been trying to grope his way to the door when he was suffocated by the smoke, while his mother was found among the bedstead fittings.

During his service, John was promoted to a MC 1st class on July 1, 1917. One of his more mysterious cases was when one Michael Cavanagh went missing.

When stationed at Willunga, John rode the police horse called Envoy. He described Envoy in later years when he was Superintendent as one of “the best horses I ever rode ... I used to love that horse”.

John Clarke was promoted to senior constable after he was stationed at Lameroo in 1918. He was then appointed sergeant in 1920 while posted in Renmark. In 1921, John Clarke was transferred to the Adelaide barracks as Sub-Inspector. The following year, he was placed in charge of the Western division, with headquarters at Wallaroo, where he remained until 1926, attaining the ranks of third class Inspector and second class Inspector. In 1926, he was given control of the barracks at Port Road, taking charge of Central Division, at the rank of first class Inspector, and then became Superintendent in November 1929. He finally retired in 1934 and a newspaper article noted that:

Superintendent John Clark was presented with a wireless set by the Police Commissioner at an official presentation attended by various police officers.

John Clarke died on December 17, 1948 and was survived by his wife Elizabeth and his daughter Vera. He is buried at Centennial Park. 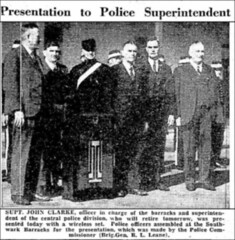 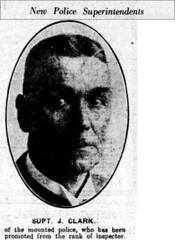 Do you remember Clarke, John (Constable) ? Then Join up and add your memory here.

This page was last modified on 23 June 2020, at 16:36.Text on this site is available under the Creative Commons Attributions/Share Alike licence; additional terms may also apply. See our Terms of Use.
About Now and Then | Places | People | Events | Organisations | Things | Contact us