William Colton was born in Devon, England in about 1795 and he married Elizabeth Blacker in about 1820.

William (aged 44), with his wife Elizabeth (aged 40) and their four sons William (junior) (17), John Blackler (15), Thomas (12), and Edwin (7) arrived at Port Adelaide aboard 540 ton ship Duchess of Northumberland on 19 December 1839. The ship was under the command of Captain Frederick Geare and carried a general cargo, 11 passengers and between 160 and 350 steerage passengers. It had departed from London on 5 August and son Albert (aged 1) had died on 8 September, during the voyage, of ulceration.

On Christmas Day 1839, William Colton and Charles Hewett accompanied William Randell on a tour of the South Australian Company’s southern country sections seeking land on which to settle. They choose four sections (including sections 136 and 147) that they named Oxenberry and Lower Oxenberry Farms, part of District C that they called Doringa Valley, later McLaren Vale.

William Colton and Charles Hewett were responsible for a letter addressed to the Editor of the Adelaide Chronicle newspaper that appeared in that newspaper in October 1840. It described their farms in glowing terms and the great successes that they had in the colony. This was part of a campaign that started in December 1839 to promote the opportunities offered by the new colony after negative commentary had been circulated and published in newspapers in other colonies, India and in England. A slightly different version of the same letter addressed to the Directors of the South Australian Company and dated September 1840 was published in the South Australian Record newspaper in Feb 1841.

In 1847 William Colton served on a Grand Jury for the Supreme Court (Criminal) and he held the license for the Devonshire Hotel (located on section 146) in McLaren Vale in June 1849.

William Colton, aged 58 years, died on 10 July 1849 and he is buried in the McLaren Vale Congregational Cemetery. 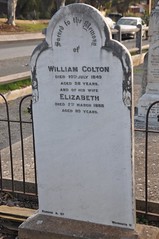 Do you remember Colton, William ? Then Join up and add your memory here.

This page was last modified on 10 August 2018, at 09:25.Text on this site is available under the Creative Commons Attributions/Share Alike licence; additional terms may also apply. See our Terms of Use.
About Now and Then | Places | People | Events | Organisations | Things | Contact us