John Colville was born on 13 Dec 1813 at Campbelltown, Argyll, Scotland. His parents were John Colville (1775-1832) and Martha McMurchy (1778-1856). He married Harriet Margaret nee Arthur (1817-1893) in 1839 at Campbelltown. They lived at Ballygroggan, Scotland before emigrating to South Australia. Religion – Presbyterian, Church of England.

John Coville arrived, aged 25 years, on board Ariadne from Greenock, Scotland on 13 Aug 1839 with wife Margaret, aged 22 years. Application 4355. Embarkation 2502. Together with his brother Matthew Colville, aged 23 years. Other settlers who became resident on the Aldinga Plains to arrive aboard Ariadne included Duncan Stewart and Mrs Isabella McMillan with her three children. Residence - Adelaide, Unley and Willunga. John and Matthew Colville are listed on Section 278 on the Arrowsmith Survey of District C undertaken by John McLaren in 1840. They were resident in District C for the 1841 Census and they had an occupation licence in 1842. They were listed as the owners of section 276 to the south-west of the township of Willunga and they imported 1,500 sheep from Scotland to their property on Colville Road that they called Moy Hall. John Colville was appointed as a Director of the newly formed South Australian Agricultural and Horticultural Society in May 1844 and he was reappointed in June 1845. He was also active in the Willunga Ploughing matches. In 1846 John and Matthew Colville applied for an occupation licence for the Rivoli Bay district. John Colville may have also been a qualified attorney and he certainly maintained an active involvement in business in the city of Adelaide through the 1840s including acting as a special juror in 1849. 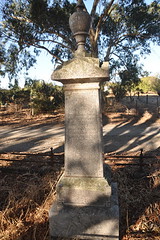 Do you remember Colville, John ? Then Join up and add your memory here.

This page was last modified on 7 May 2020, at 17:20.Text on this site is available under the Creative Commons Attributions/Share Alike licence; additional terms may also apply. See our Terms of Use.
About Now and Then | Places | People | Events | Organisations | Things | Contact us