Denis Creedon was born in 1889 and lived in the Willunga area until some time between 1900 and 1910, attending Willunga Public School. 1 His mother, Margaret, was the youngest daughter of Anastasia and Thomas Prendergast of Aldinga and Willunga. His father, Denis, became a carpenter at the mines in Broken Hill, was one of the first aldermen elected to the Broken Hill Municipal Council, and at one time was mayor. Denis Junior’s brother, Jack, was born in 1892 and was killed in World War 1 at Fromelles. His sister, Mary Anastasia, married William Henry Byrne of Dublin in Adelaide on 16 January 1914.

Denis and his brother Jack enlisted together at Keswick on 16 July 1915. He received a typical farewell from his workmates: 'Included in last week's departures from Broken Hill for the front was Private D. Creedon. Up to the time of enlisting he was employed as a carpenter on the Amalgamated. Zinc …works. At lunch time on Monday, September 6, all his work-mates assembled in the workshop and presented him with a wristlet watch as a token of remembrance, and wished him a busy time and safe return. In returning thanks for the present and hearty good wishes, Private Creedon stated that he would do his best to retain his old workmates' good opinion, and expressed the hope that he would be allowed to be where there was something doing." 2

He arrived in Marseille on the 21st March 1916 after training in Ismailia (Egypt). While in Egypt, he contracted Mumps and was hospitalised for 2½ weeks. In Marseille, he contracted influenza and was hospitalised for another 2½ weeks, then joining his unit of the 27 Battalion in the Somme on 20 February 1917. Denis was killed in action 1½ weeks later, on 2 March 1917, aged 28 in an attack north of Warlencourt. 3

A sad, but probably common, story developed as the Creedon family spent years trying to get information about their son’s death:

On the 14th October 1916, Mary telegrammed the Base Records Office in Melbourne enquiring whether both brothers were on the casualty list, receiving a reply two days later that John was reported missing and Denis was with his unit.

By 1917 his parents were seeking Denis’ death certificate and deferred pay and, in 1921, his personal effects. In July 1922 they received his memorial plaque. They were notified that Denis was buried 2½ miles south of Bapaume and the authorities were unable to find his grave. The grave was not registered and policy was to add the deceased’s name, regimental description and date of death to collective memorials. Following this notification, the Creedons sought a photo of the collective memorial stones. In 1923 they received his victory medal. Not until 1925 did they receive a letter stating he was buried in Warlencourt British Cemetery near Arras, France in Grave no 9, Plot 4, Row K. 3

Denis is also memorialised on the Cheer Up Society Collage in the Show Hall at Willunga and on his grandparents’ headstone in St Joseph’s Catholic cemetery, Willunga. 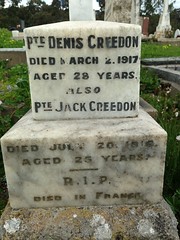 Do you remember Creedon, Denis ? Then Join up and add your memory here.

This page was last modified on 3 August 2021, at 15:22.Text on this site is available under the Creative Commons Attributions/Share Alike licence; additional terms may also apply. See our Terms of Use.
About Now and Then | Places | People | Events | Organisations | Things | Contact us