John Vincent (Jack) Creedon was born in 1892 and lived in the Willunga area until some time between 1900 and 1910, attending Willunga Public School. 1 His mother, Margaret, was the youngest daughter of Anastasia and Thomas Prendergast, of Aldinga and Willunga. His father, Denis, became a carpenter at the mines in Broken Hill, was one of the first aldermen elected to the Broken Hill Municipal Council, and at one time was mayor. Jack’s brother, Denis, born in 1889, was killed in World War 1, north of Warlencourt. His sister, Mary Anastasia, married William Henry Byrne of Dublin in St Francis Xavier Cathedral in Adelaide on 16 Jan 1914.

At the time of his enlistment, Jack lived at Broken Hill and was working as a bricklayer. He and his brother Denis enlisted together at Keswick on 16 July 1915.

Jack trained in Alexandria and then arrived in Marseille as part of the 32nd Battalion AIF on the 26th June 1916, amidst the aftermath of the Gallipoli Campaign. Three and a half weeks later on the 20th July 1916, he was reported missing, aged 24. 2

After a reorganisation and expansion of the AIF in preparation for the fighting against the Germans along the Western Front, the 32nd Battalion had fought its first major battle at Fromelles on 19 July 1916, having only entered the front-line trenches 3 days previously. The attack was a disastrous introduction to battle for the 32nd - close to 90 per cent of its actual fighting strength became casualties. 3

In April, Mrs Creedon had received this letter from Jack, written on February 26, 1916 in Heliopolis, Egypt:

"We had a splendid trip coming over: we stopped at Colombo two days, and went for a march each day. It is a great sight, and the natives are very funny. We stayed at Port Suez a couple of days, but never landed. We came up the Suez Canal to Alexandria on the Sunday afternoon. It was a great sight coming through the canal, which is only about 200 yards wide. We disembarked at Alexandria, and came about 146 miles by train to Heliopolis. We travelled at night, and it was pretty cold, and arrived about 4.30, just as day was breaking. We soon settled down to our work. War news is very scarce over here. I met Charlie Fitzpatrick last night. He is looking very well after his rough time in the trenches, and he wishes to be remembered to you. I met a lot of the boys here whom I know. I have had a good look around Cairo. Every spare minute we get we make the best use of, as we expect to leave for another place in a couple of days. We have been inoculated and medically examined again, so we ought to be able to go through anything now. I never felt better in my life. I went to the Pyramids yesterday with a couple of pals. We saw these great wonders of the world, including the Sphinx. A guide told us that it took 30 years to build the big pyramid, and that there were 300,000 men working on them off and on, about 500 at a time; slaves were employed, and they used to get bread and onions for their labour. It is about 450ft. high, about a quarter of a mile round, and goes up the steps to a point. You can get a cup of tea on top. Cairo itself is not worth going to in my opinion: it is as they all say one of the dirtiest cities in the world. That is at one end. It is like any town. I suppose one good end and one bad end. The good part of the town is all right, but Heliopolis is the nick of the lot. We are camped right alongside the town. I am enjoying the sights." 4

A sad, but probably common, story developed as the Creedon family spent years trying to get information about their son’s death:

On the 14th October 1916, Mary telegrammed the Base Records Office in Melbourne enquiring whether both brothers were on the casualty list, receiving a reply two days later that John was reported missing and Denis was with his unit.

In August 1922, Jack’s parents were seeking a photograph of his grave. The reply came stating that the Authorities had decided not to photograph any memorials. The parents had to apply to the National Council of the YMCA, London, who would send 2 post cards for 2/6, once the memorials were erected. In 1925, the Creedons found out that there were no remains of Jack and his name was to go on the memorial at Villers-Bretonneux, which was to commemorate the whole of the AIF missing in France and Belgium. In 1926 they were notified that Jack’s name was to be inscribed on the screen behind the Cross of Sacrifice in the VC corner of the Australian Cemetery. 2

Jack is also memorialised on the Cheer Up Society Collage in the Show Hall at Willunga and on his grandparents’ headstone in St Joseph’s Catholic cemetery, Willunga. 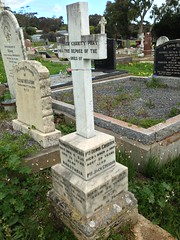 Do you remember Creedon, John Vincent ? Then Join up and add your memory here.

This page was last modified on 12 April 2019, at 20:31.Text on this site is available under the Creative Commons Attributions/Share Alike licence; additional terms may also apply. See our Terms of Use.
About Now and Then | Places | People | Events | Organisations | Things | Contact us