Francis Culley was the oldest son of Benjamin Culley (1788-1833) and Elizabeth Drake (1795-1827). He was born at Trewse Hall, Trowse with Newton in Norfolk, England on 16 May 1821. He was Wesleyan Methodist. Francis Culley, aged 25, was a farmer and shearer who arrived in South Australia on 14 August 1848 with his younger brother, Thomas, aged 20, in steerage onboard Gratitude from London. Thomas Culley (1828-1884) lived at Willunga.

Francis Culley married Treaza (Teresa) Cox (1840-1935) at the residence of her father Gabriel Cox (Hackle Farm) in Aldinga on 31 August 1857. They had nine children:

Francis Culley was a farmer and horse breeder at Aldinga. He had 77 acres in the Hundred of Willunga before 1850 (section 602). The family lived at Woodside Farm by 1861 and had extensive land holdings, firstly south of Aldinga and on the hills between Willunga and Sellick’s Hill, where they ran sheep. Then, around 1882, Francis Culley moved some of his land holdings to the east of the township of Willunga (sections 306, 440 & 703) and at the top end of Taylor’s Hill Road (sections 1769-773).

Francis attended a dinner to farewell Samuel White in 1853 on his temporary return to England. 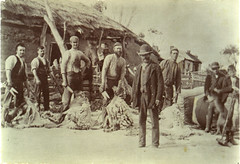 Do you remember Culley, Francis ? Then Join up and add your memory here.

This page was last modified on 27 May 2021, at 15:29.Text on this site is available under the Creative Commons Attributions/Share Alike licence; additional terms may also apply. See our Terms of Use.
About Now and Then | Places | People | Events | Organisations | Things | Contact us