Henry did not travel out to Australia with his older brother Sampson and his cousin William in 1840 as he appears in the 1841 UK census. Instead he appears to have arrived on 14 Nov 1848 on board Bussorah Merchant from London. Also on board Bussorah Merchant was farm servant Sarah Elizabeth Gregory (1820-1865) who was probably going to Willunga to join her sister Jane. Shortly after he arrived Henry, aged 33 years, married Sarah Elizabeth, aged 29 years, on 22 March 1849 at Willunga. Henry and Sarah Elizabeth had just one child: Henry Dawe (b.10/03/1850- d.20/02/1888 at Adelaide)

Henry Dawe was granted a publican’s license for the Bush Inn in Willunga in March 1849. On Saturday 17 Nov 1849 Henry Dawe, aged 33, the respected landlord of the "Bush Inn." died near his residence at Willunga, He had accompanied a man named Campbell to fetch firewood only about four hundred yards from the inn, and was apparently in good health up to the moment when Campbell left him to return to the house. Soon after, Mr. Dawe was found by Mr. McCoy of the Mounted Police, lying on his face, and quite dead. His brother, Mr. Sampson Dawe, and others, were soon on the spot, and removed the body to the "Bush Inn". An inquest was held before the Coroner, W. Wyatt, Esq., on 19 Nov. There were no marks of violence nor anything to indicate other than that death had ensued from natural causes, and the jury returned a verdict of "Died by the visitation of God." Henry was buried at St. Stephen’s Anglican Cemetery in Willunga. 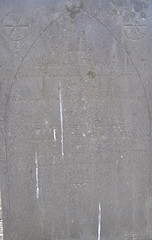 Do you remember Dawe, Henry ? Then Join up and add your memory here.

This page was last modified on 25 May 2016, at 09:30.Text on this site is available under the Creative Commons Attributions/Share Alike licence; additional terms may also apply. See our Terms of Use.
About Now and Then | Places | People | Events | Organisations | Things | Contact us