Jane Gregory was born on 3 November 1816 at Tamerton Foliot in Devon, England. She was the daughter of John Gregory (1785-) and Philippa Abel (1786-1846) and the sister of Sarah Elizabeth Gregory.

Jane travelled to South Australia with her husband, Sampson, and their infant daughter, Elizabeth, a few months after their marriage. Also in their party were Sampson's cousin, William (25), his wife , Mary Anne (21), and infant son, William Henry. They left Gravesend on 5 March 1840 on board the 453-ton barque Charles Kerr, with Captain Arnold, from London, Gravesend, and Deal, arriving in Port Adelaide on 17 June 1840.

Jane and Sampson had at least five children: 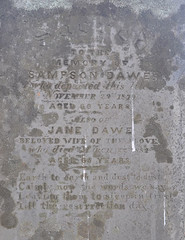 Do you remember Dawe (née Gregory), Jane ? Then Join up and add your memory here.

This page was last modified on 3 October 2021, at 15:08.Text on this site is available under the Creative Commons Attributions/Share Alike licence; additional terms may also apply. See our Terms of Use.
About Now and Then | Places | People | Events | Organisations | Things | Contact us