George Edward Eden was born in Harberton, Devon, on 14 October 1848, the youngest of ten children of William and Charlotte Eden (nee Bickford). Like his father and brothers, he worked in the local slate quarries, starting work at the age of 9 years. He married Mary Finch (1848-1930) in January 1880 and, by 1881, he was a Head Quarryman living with his family in the Quarry house in Stert, Dipford, Devon.

George and Mary’s three children, born in England, were:

Unlike his brothers, who emigrated to the USA, George Eden sailed on the Cusco for Melbourne with his wife, three children and nephew, Richard James Eden, arriving on 17 October 1885 and traveling on to Launceston Tasmania on the same day. He was among a large group of quarrymen from Devon and Cornwall recruited by the Bangor Slate Quarry to work in a quarry near Launceston. The company failed and the quarry closed by 1888, leaving the workers homeless and without work.

The Edens tried their luck in Melbourne for some months but, by July 1888, they had made their way to Willunga where George obtained work at the Bangor Slate Quarry, later the Australian Slate Quarries. He remained there until at least 1921 when he was described as the doyen of the present employees who is in his 74th year and busy at work. He was formerly in the Larcombe quarries, South Devon and reached Willunga in 1888, only a few days prior to the wreck of the Star of Greece on the coast in that neighbourhood. The veteran is a skillful slate worker, and a marvel of energy, despite his years.

The family initially lived in a cottage in Beltunga Gully, on the southern outskirts of Willunga, and a short walk to the quarries where he worked. The family later moved to St Andrews Terrace, possibly number 25. In a letter back to England, George sent an almond from his garden and spoke of growing potatoes.

George was a staunch supporter of the Willunga Church of Christ, into which he was formally received in August 1888, having initially been baptised into the Church of Christ in Maryborough, Victoria in September 1887. He was a regular worshiper at the Church from 1888 into his old age. When membership dwindled, and he was the only remaining member of the congregation, he would open the Church door every Sunday morning and sit for a while and worship alone. He became known as Old Fidelity.

Mary Eden died on 22 January 1930, aged 82 years. George Eden, who was almost blind, then went to live with his oldest son, Jacob (Jake) Eden, in Port Adelaide. where he died on 23 September 1934, aged 86 years. George and Mary Eden are both buried in the Cheltenham Cemetery, Adelaide. 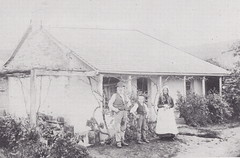 George and Mary Eden with son George, 1890s, outside their house in Beltunga Gully, Willunga 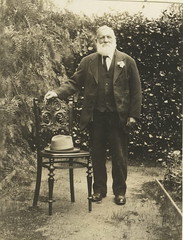 Do you remember Eden, George Edward ? Then Join up and add your memory here.

This page was last modified on 13 February 2021, at 15:02.Text on this site is available under the Creative Commons Attributions/Share Alike licence; additional terms may also apply. See our Terms of Use.
About Now and Then | Places | People | Events | Organisations | Things | Contact us