George Reynolds Ewens was a mounted constable (MC) stationed at Willunga from April 28, 1898 to August 1903. He was born at Port Elliot on July 22, 1859 where his father Sergeant J.R. Ewens was also a serving police officer. His uncle, William Robert Ewens, was also a policeman, who formed part of Tolmer’s Gold Escort in the 1850s. After considerable pioneering work in the interior of Australia, George joined the Police Force in February, 1884. His first posting was at Goolwa, where he spent 7 years. He then took charge at Snowtown during the time the railway was being constructed at Gladstone, on which 600 navvies were engaged. He was then posted to Willunga in April 1898, and then to Gawler in August 1903. His later posting to Yorketown coincided with the wreck of the steam ship Clan Ranald, which sunk on Troubridge Shoal on January 31, 1900. Forty people were drowned. MC Ewens, who was stationed at Edithburgh, patrolled the coast for three weeks after, finding 36 bodies from the ill-fated ship. He died on June 22, 1933 and is buried at Pink Lake Cemetery, Yorketown. 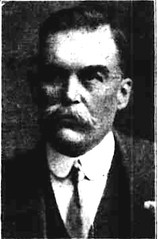 Do you remember Ewens, George Reynolds (Constable) ? Then Join up and add your memory here.

This page was last modified on 23 April 2020, at 10:31.Text on this site is available under the Creative Commons Attributions/Share Alike licence; additional terms may also apply. See our Terms of Use.
About Now and Then | Places | People | Events | Organisations | Things | Contact us