John Ferris is best known for his Saddlery on the Main Road in McLaren Vale.

John arrived in South Australia in June 1877 at the age of 13. He came on the “Airlie” with his parents Richard and Susan and their large family. They settled in the Noarlunga area.

As a young man, John moved to McLaren Vale where he worked for the manager of Mrs Jared’s store in Mudge Street. He used to bring out 5 gallons of yeast weekly from the Primrose Brewery in Rundle St.

His first saddlery business was carried out in rooms attached to Mrs Jarrad’s Store. Then in 1880 he built a home and opened his new saddlery premises in a prime location at 98 Main Road, McLaren Vale. The saddlery was a popular rendezvous and was the site of the first agency of The Bank of Adelaide which rented a room for two hours thrice weekly, for 2/6 a week.

In 1889 John Ferris married Mary Ann Webb. Their only child Harry was born later that year, but sadly died in June 1891.

In the mid-1880s John Ferris was a member of the Committee that organised a McLaren Vale Horse Race meeting on the outskirts of the town (near Caffrey Street). He was one of the original trustees of the Institute Hall and Library which opened in 1894 in McLaren Vale.

In the 1920s John Ferris had a Studebaker 6 car, with wire wheels, considered very smart in those days. He carried out taxi work and was nick-named “Uncle Whirewheels”. He farmed in the area after relinquishing his saddlery in the 1930s.

After the death of his first wife Mary Ann in 1929, John remarried to Elizabeth Liverton. She died in 1960, aged 87 years. John Ferris died at McLaren Vale in November 1961 aged 97 years. 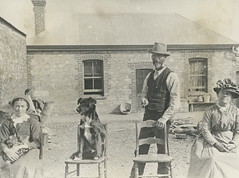 Do you remember Ferris, John ? Then Join up and add your memory here.

This page was last modified on 16 May 2018, at 16:57.Text on this site is available under the Creative Commons Attributions/Share Alike licence; additional terms may also apply. See our Terms of Use.
About Now and Then | Places | People | Events | Organisations | Things | Contact us