Henry became one of the first mounted troopers in the colony, serving on several trips with the gold escort in 1852. In 1855 he was a sheep inspector in Adelaide, and the family lived in Chowilla. By 1870 he was ill and had resigned, and the family travelled to New Zealand for his health. They were probably the Glenie family of two adults, six girls and two boys who are noted in the paper as leaving Adelaide for New Zealand on the 'Ocean Wave’ on 5 April.

In 1873 Henry was station-master at Queen’s Own Town (now named Finniss) when the horse trams ran between Strathalbyn and Goolwa. Theresa was only 19 years old when her father died on 27 Sept 1875, aged 56 years, at the Finniss Tramway Station, leaving his wife and eleven children. Theresa then took on her father's job as station-master at Queen’s Own Town and Port Elliot, where she worked until steam trains replaced the horse trams in 1883.

There is some evidence that Mrs Glenie and some of the children lived in Mitcham during the second half of the 1880s. Theresa appears to have worked for James Marshall and Co (drapers, furniture and general importers of Rundle Street) in 1888 and probably for some years before, as the company was rapidly expanding during the 1880s. Subsequently, she worked for the Post and Telegraph Department for nearly 30 years (1888-1917) and was the post and telegraph mistress at Mitcham (1888-1905) and Willunga (1905-1917). Theresa was an agent for the Savings Bank of South Australia at Mitcham from 1888 and Electoral Registrar until 1905. According to The Express and Telegraph newspaper, when she left Mitcham, the Catholic Church held a farewell for her where she was presented with a beautiful silver teapot and two sugar bowls, with the inscription — "Presented to Miss Glenie by her Mitcham friends, July, 1905." Theresa was the post and telegraph mistress and the Electoral Registrar at Willunga Post Office for twelve years (1905-1917) where her salary was salary £140 (fixed), less £14 for rent of quarters.

The Glenie girls in Willunga were described as ‘great favourites … and pretty girls too.’ Theresa sang on occasion in Willunga at public celebrations. Interestingly, she sang at the farewell of the Creedon family, who were also members of St Joseph’s Catholic church community in Willunga. Like many people during World War 1, Theresa was involved in organisations that sent relief to the front, notably Willunga’s Red Cross branch.

At her retirement from the Post and Telegraph Department and farewell from Willunga in 1917, The "Revs. T Wood and Father Brady spoke in appreciative terms of Miss Glenie's uniform courtesy, her close attention to her official duties, and her consistently generous support of township affairs." The Advertiser newspaper reported that she was presented “with a dressing-case and a travelling rug”. She lived for a time in Sydney and afterwards in Melbourne where she died, aged 62 years, in St. Kilda on 19 June 1919. Theresa was buried in the Brighton Cemetery, Victoria, on Saturday, June 21 1919. Her obituary in The Advertiser newspaper described her as ”a woman of education, had a large circle of friends, and was held in the highest esteem”.

Theresa had some illustrious connections. She was the granddaughter of Anglican Archdeacon Glenie, of Ceylon and niece of Catholic Reverend Canon Glenie of Weybridge, Surrey, England. She was a Catholic and was active in the Church, both in Mitcham and Willunga Theresa’s sister, Agnes, known as Maude, was the admired Nurse Glenie who went to the South African War and, in 1900, was in charge of a small convalescent hospital, Old St. Andrews. Maude married Hugh Trevanion Bonython, the fifth child of Sir John Langdon Bonython. She pre-deceased him by less than a month in 1915.

Hugh Bonython was an editor of The Advertiser. His father, Sir John Bonython was sole proprietor of the paper from 1893 to 1929, a member of the first Australian Parliament and a generous philanthropist. His donations included £50,000 to build Bonython Hall, £20,000 to fund a Chair in Law at the University of Adelaide and £100,000 to build SA’s Parliament House.

Theresa's mother, Amelia Lucy Glenie (nee Besley), late of Mitcham, had died at the Willunga Post Office on the 6th August 1905, aged 77 years, just two weeks after they had moved to Willunga. She is buried in St Joseph’s Catholic Cemetery in Willunga. 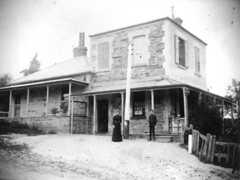 Do you remember Glenie, Theresa ? Then Join up and add your memory here.

This page was last modified on 2 May 2020, at 14:27.Text on this site is available under the Creative Commons Attributions/Share Alike licence; additional terms may also apply. See our Terms of Use.
About Now and Then | Places | People | Events | Organisations | Things | Contact us