Ruth (nee Lange) was born at Gawler in 1911, the eldest of seven children of Ernest August Berthold Lange and Esther Lange (nee Grapes). Ruth attended the Barossa Goldfields school, walking four miles there and four miles back each day. At 14, Ruth went to Muirden Business College in Adelaide.

Ruth married Hillman Goldfinch in 1930. They lived in St Anne's Lodge in St Peters Terrace in Willunga for forty years from 17 May 1941 to 1982. Together they established the family business Goldies Roadhouse in High Street Willunga.

Ruth was involved with the Red Cross Society for about 50 years, especially the Junior Red Cross. She joined the Willunga Branch of the National Trust of SA in 1969 and held the position of Treasurer for many years from 1975.

Ruth was also an active member of the CWA, the Mother’s Welfare Club, the Church of England and the Women’s Auxiliary of the Southern Districts War Memorial Hospital. She was an avid collector of jugs and spoons.

In 1988 she received the Citizen of the Year Award from the District Council of Willunga for her work in the community. 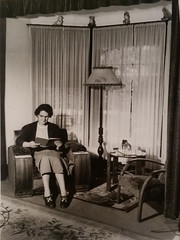 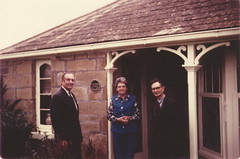 Do you remember Goldfinch, Ruth ? Then Join up and add your memory here.

This page was last modified on 4 June 2017, at 14:30.Text on this site is available under the Creative Commons Attributions/Share Alike licence; additional terms may also apply. See our Terms of Use.
About Now and Then | Places | People | Events | Organisations | Things | Contact us