Spencer Atkinson Hall was the second son and youngest child of James John Hall and Bridget Hall (née Atkinson). His father was a senior police officer in the South Australian Police. Unfortunately, when Spencer was around two years old, his father had mental health issues and died in the lunatic asylum. His mother married again, to Thomas Martin, when Spencer was about 7 years old.

Mr Hall joined the staff of the Bank of Adelaide in Adelaide in 1882. After a few years in the head office, he was appointed manager of the branch at Marree. He then married Jessie Walsh in 1887. In 1888, Mr Hall transferred to the Noarlunga branch, to which was attached an agency at Aldinga. Later, as McLaren Vale developed into a wine-growing district, he opened an agency in that town. All three offices were attended by Mr Hall. When the National Bank withdrew from Willunga in 1893, Mr Hall opened an agency in that town. Soon afterwards, owing to its central situation, McLaren Vale was transformed into a branch, of which Noarlunga, Aldinga and Willunga were agencies.

Spencer and his wife, Jessie, had the following children:

Owing to indifferent health, Mr Hall retired in 1923. He purchased the well-known property "Tsong Gyiaou", at McLaren Vale, where he lived for the rest of his life. In retirement, he took much interest in everything pertaining to the welfare of the district. He was president of the Willunga Agricultural Society, the Willunga Rifle Club, the McLaren Vale Poultry and Kennel Club and the McLaren Vale Brass Band and patron of the Southern Football Association and the Southern Farmers' Association.

Spencer Atkinson Hall died on 13 June 1927 at Tsong Gyiaou and is buried at St Stephens Anglican Cemetery, Willunga. Katharine died on 10 November 1947 and is buried with Spencer. 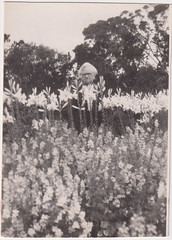 Do you remember Hall, Spencer Atkinson ? Then Join up and add your memory here.

This page was last modified on 14 January 2022, at 18:32.Text on this site is available under the Creative Commons Attributions/Share Alike licence; additional terms may also apply. See our Terms of Use.
About Now and Then | Places | People | Events | Organisations | Things | Contact us