Ann Bastian was born on 23 May 1833 at Crowan in Cornwall, England. Religion – Wesleyan Methodist (Uniting Church) but she married in the Anglican Church.

John Holman held a depasturing licence at Yankalilla in 1857 and they lived at Bald Hills.

Ann Holman (nee Bastian), aged 27 years, died on 14 Nov 1860. She is commemorated (as Ann Bastian) in the Willunga Wesleyan Methodist (Uniting) Church on a panel of a chest tomb (alongside her sister Hannah) carved by George Sara. 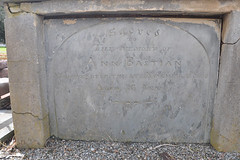 Do you remember Holman (née Bastian), Ann ? Then Join up and add your memory here.

This page was last modified on 28 May 2020, at 16:30.Text on this site is available under the Creative Commons Attributions/Share Alike licence; additional terms may also apply. See our Terms of Use.
About Now and Then | Places | People | Events | Organisations | Things | Contact us