Reverend Peter Hughes was an Irish priest, born in 1820 in Cappaboggin, County Meath, who served the Willunga Parish Catholic Community for around 13 years. Little is known about his life in Ireland. In 1846, the first Bishop of Adelaide, Francis Murphy, visited Europe and called in at the Navan seminary in Ireland where Peter Hughes was a student. Bishop Murphy encouraged Hughes and another student, John Smyth, to come to Australia. Bishop Murphy sent both young men to study for the priesthood at the College of Propaganda in Rome, and being ordained, Fr Hughes and Fr Smyth travelled to South Australia.

Fr Peter Hughes arrived in Adelaide to find that Bishop Murphy had provided a housekeeper, furniture and a horse for him. Bishop Murphy had also arranged the 10 pound rental of “Daley’s section of Church land at Willunga should be paid over to Fr Hughes by Richard Logan, one of the few Catholic civic leaders in Willunga. Fr Hughes had a large parish to minister. On 24 August 1853, he baptized the first Catholic child to enter the parish register, Michael Kenny from Willunga. This must have been a relief to Fr Hughes. In 1853, there had been no priest for almost a year, and many of the Catholic population had gone to the goldfields. Over the next 13 years, he would regularly travel around such places as Willunga, Aldinga, McLaren Vale, Goolwa, Port Elliott Encounter Bay, Yankalilla, Rapid Bay, Prospect Hill and Meadows to administer the sacrements. He also visited places that are now simply footnotes in history books, such as Martins Swamp, Wattle Hill, Logan’s Flat, Sheoak Hill and Bishops Flat. In 1855, Fr Hughes also probably witnessed the consecration of St Josephs graveyard Willunga by Bishop Murphy. Fr Hughes erected the churches of St Peter, Yankalilla and St John the Evangelist, Port Elliott.

Fr Hughes was a fierce advocate and protector of the Catholic faith and the Catholic people. In 1855, it was decided to create a servant depot in Willunga to house 61 Irish immigrant orphan girls* who needed to find work and make a new life for themselves in South Australia. The feeling towards these girls ran high and there were many complaints about their conduct and lack of training. The South Australian Register (1/6/1855) noted that:

That there is nothing national in the prejudice is sufficiently demonstrated by the fact that Irish men and Irish boys easily find employment. The only reason why the Irish girls cannot do the same is, that owing to the want of training, they are so thoroughly useless, that they are literally not worth their wages.

After the women arrived in Willunga, Fr Hughes raised the ire of Thomas Smith Kell, who had been placed in charge of the women by the Colonial Secretary, by insisting on wages of at least 4 shillings a week, and introducing a book to be signed by the employer that enabled the women to attend Mass at least on alternate Sundays. The Colonial Secretary asked Bishop Murphy to intercede, which he did, directing Fr. Hughes not become involved in matters of employment. Matters came to a head when the women rebelled against Kell, and one of the women, Catherine Leary, in the words of T.S. Kell “attempted to assault me at the time, but threatened to murder me …”. Finally, the depot was discontinued and the Colonial Secretary was known to have commented on the “interference of the Roman Catholic Clergyman of that District”.

Fr Hughes continued to serve in Willunga until 1866, when he was transferred to the Morphett Vale Parish due to ill health, where the duties were lighter and the locality more suitable for him. He was replaced in Willunga by Fr Bongaerts.

Fr Hughes died in Morphett Vale on 20 November 1876 from chronic bronchitis. He is commemorated by a marble tablet on the north wall of St Mary’s Catholic Church in Morphett Vale. The tablet reads:

Of your charity pray for the soul of the Rev. Peter Hughes who fell asleep in the Lord on the feast of St Felix of Valios 1876 in the 56th year of his age and the 24th of his sacred ministry. Sweet Jesus grant him eternal rest. This tablet was erected in loving remembrance of their pastor by the congregation of St Mary's assisted by the Catholics of Willunga of which district he was the faithful pastor for 14 years.

Fr Hughes is standing second from the left in the accompanying photograph. 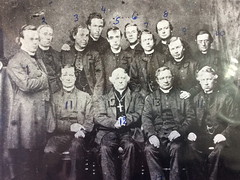 Do you remember Hughes, Peter (Rev.) ? Then Join up and add your memory here.

This page was last modified on 12 April 2019, at 20:48.Text on this site is available under the Creative Commons Attributions/Share Alike licence; additional terms may also apply. See our Terms of Use.
About Now and Then | Places | People | Events | Organisations | Things | Contact us