Edward Hunt was the 7th surviving child of Matthew and Elizabeth Hunt of Myponga. He was born at Cherry Gardens on 22 June 1856.

They had five children:

Edward was a farmer and sheep breeder. After their marriage in 1882, he and Mary lived at Pretty Valley, Myponga, on a farm given to them as a wedding present by his father Matthew Hunt. They then moved to Peppermint Farm at Bethany (McLaren Vale), which was owned by Mary’s father Isaac Needham It was previously the home of Moses Chambers and his family.

By 1890 they had purchased a farm at Delabole which included the land on which stood the old Delabole Church in which they stored their wool. Edward was a successful sheep breeder. In 1907 he auctioned 15 bales of fine wool for 13 3/4d per lb, the highest price obtained until then for southern crossbred wool.

Edward Hunt was on the Committee of the Willunga Show in 1895.

He luckily survived several mishaps. In July 1915 he suffered bruises when thrown out of his sulky after the horse took fright at the train. Later, in September that year, he was seriously injured when his sulky overturned and, being a stout man, was thrown heavily on his head and shoulder and in addition got staked in the groin, causing an ugly wound. Dr Haines helped with his recovery.

In 1911 the family moved into their house The Gums at 10 Bishop Street in Willunga township, previously owned by Mary’s father Isaac Needham before he died in 1899. 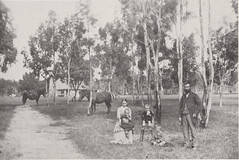 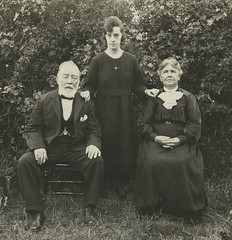 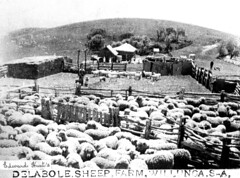 Do you remember Hunt, Edward ? Then Join up and add your memory here.

This page was last modified on 13 February 2021, at 10:35.Text on this site is available under the Creative Commons Attributions/Share Alike licence; additional terms may also apply. See our Terms of Use.
About Now and Then | Places | People | Events | Organisations | Things | Contact us