In 1856, at the age of 14, he was apprenticed to William Joseph Bott, a boot and shoemaker at 17 Aldinga Road, Willunga.

In 1869, William Illman purchased the property at 17 Aldinga Road from his father-in-law, William Joseph Bott, and ran a boot and shoe-making business there for more than twenty years.

William Illman collected the money to purchase the bell which now resides in the Bell Tree opposite the Willunga Uniting Church. The bell possibly dates from the second Wesleyan Methodist Church (1857), which was opposite the Bell Tree.

Sometime between 1895 and 1897, William and Lucy moved from Willunga to 11 Clyde Street, Parkside. 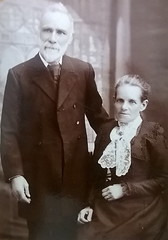 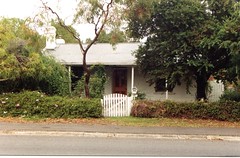 Do you remember Illman, William ? Then Join up and add your memory here.

This page was last modified on 2 May 2021, at 18:16.Text on this site is available under the Creative Commons Attributions/Share Alike licence; additional terms may also apply. See our Terms of Use.
About Now and Then | Places | People | Events | Organisations | Things | Contact us