Alice Lewsey was born in South Australia, probably in McLaren Vale (formerly Gloucester). She was the second daughter of Charles Lewsey (1819-1889) and Elizabeth Ann Ansell (née Brace) (1815-1905), both of McLaren Vale. Her parents had set sail on Anna Maria on 12 July 1849 and arrived in South Australia on 11 Oct 1849. Charles Lewsey farmed Lot 2 in Gloucester (McLaren Vale). Charles and Elizabeth had four daughters, including Alice. Her elder sister, Elizabeth was born in 1851, Jane was born in 1856 and Alma in 1858.

Alice married Thomas Dennis Jackson on 30 June 1873. There was an age difference of about 23 years between the bride and groom. They married at Thomas’ childhood home, The Grange, on Jackson Hill Road. Thomas moved north to become involved in mining in early 1873. Alice joined him perhaps a year later. The birth of their first son, Charles William, probably named for both his grandfathers, occurred at Winninnie on August 30, 1874. Living in the north would have been fairly hard and perhaps lonely for Alice, however, on September 9, 1874, her sister Elizabeth married Thomas’ brother George, and they also moved up to the north of South Australia.

Young Charles William was joined by Alice Blanche on September 9, 1875 at McLaren Vale. It is possible that Alice travelled back home so that she could give birth at her mother’s house. The birth of Ellen Lawrence also occurred in the Willunga District on June 23, 1878, so it is possible that she found the birth of her first child in the north difficult, either medically or emotionally or both. Tragedy struck on June 28, 1880 with the unexpected death of two year old Ellen. Notices show the death to have followed an illness of only about 20 hours, which must have been a tremendous shock to the family. During this time Thomas Jackson was very busy. He had established stores in partnership with his brother George in Cradock, Hawker and Wilson, he was a Justice of the Peace, and he went and spoke at a number of public meetings to argue for improved services for Cradock and Wilson. At the same time, his business ran into severe money troubles, which must have put strain on the family. Meetings of creditors determined that their estate should be assigned.

Then George, Alice's brother-in-law, died unexpectedly of hepatitis and pneumonia. Her sister, Elizabeth, then moved back to Willunga. For Thomas and Alice. the money troubles continued, probably due to the economic downturn caused by a long drought. Despite these setbacks, Jackson was still a local man of note. He was on a committee to manage cemetery affairs and to affect resolutions to petition the government to provide extra services for Cradock. In 1885, he must have accumulated enough capital to reestablish his storekeeping business as his shopkeeper license was renewed. Another meeting of creditors was called in December 1886, which indicates his relief was only temporary.

According to Courthouse records, on Jan 28, 1883, Jessie Jackson was born, but this cannot be confirmed. Young Charles William had started winning prizes at the 1885 Cradock Show for drawing and copybook writing, and her youngest son, Harold Edgar, was born at Cradock. Two and half years later, in 1888, her husband, Thomas Dennis Jackson died of “English Cholera” at the Western Ho mine at Teetulpa that he then managed. Alice was left a widow with her eldest child, Charles William, aged of 14, and the youngest, Harold Edgar, aged two and a half.

Alice returned to Willunga and became a seamstress. From 1902-5, she leased a shop at Aldinga, which she managed until 1905. But tragedy had not finished with Alice yet. Alice had moved to Adelaide by the time World War I commenced. Then she received the news that her youngest son Harry, a Lance Corporal with the 10th Australian Infantry Battalion, had been killed on 7 May 1917 at Bullecourt. A shell had landed on his dugout. He is buried at Villers-Bretonneux and his photograph can be seen on the World War I collage in the Willunga Show Hall. Alice Jackson appeared in a photograph with her three widowed sisters, apparently dated to the late 1920s.

Alice was to spend nearly 61 years as a widow, dying at the age of 95 in July 1949 at her home in Rosefield. She was cremated at the West Terrace Cemetery in Adelaide.

Extracted from the forthcoming book "Fragments of Time: The Lives and Works of the Willunga slate carvers 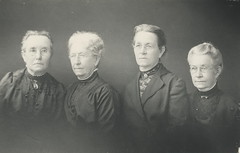 Do you remember Jackson (née Lewsey), Alice ? Then Join up and add your memory here.

This page was last modified on 16 August 2021, at 12:07.Text on this site is available under the Creative Commons Attributions/Share Alike licence; additional terms may also apply. See our Terms of Use.
About Now and Then | Places | People | Events | Organisations | Things | Contact us