Born 22nd April 1860, in Pennsylvania, North America, Linie came to South Australia at the age of four with his family. Following his school days, he accepted an engagement to carry rails from Willunga to Victor Harbour. This was done on horse back, and he continued with the appointment for 12 months. He then entered the commercial world, in the employ of H.A. & W. Goode, General Storekeepers, Willunga, where he obtained a thorough acquaintance with trade details, during the 24 years spent with this firm.

Subsequently in 1899, he decided to launch into business on his own account. The premises, at 8 Hill Street, were owned by Thomas Lasscock, and had not previously been used other than as two semi-detached dwellings. Consequently, the conversion to a business of one half of this building entailed considerable work and enterprise.

Linie was vitally interested in civic affairs of the town. He was Chairman of the District Council for several years, and it was during this time that he became chiefly instrumental in securing the Goodwood to Willunga Railway, which opened on 20 January 1915. He was a committee member of the Agricultural and Horticultural Society, Member of Willunga Rifle Club from its inception, steward of the Racing Club, President of the Football and Cricket Clubs, President of the Southern Football Association, President of the Progress Association, Justice of the Peace, a member of the Masonic Lodge and the Oddfellows Lodge. He was also on the rescue team when the Start of Greece was wrecked on 13 July 1888 near Port Willunga.

1) His first wife was Sarah Gepp, who had one son, Howard James Jacobs.

2) His second wife was Fanny Chenoweth, who gave birth to Rita Elizabeth

After much sickness and having built up a good business in the 17 years, Linie died 19 March 1916 aged 53 years, and was buried at St Stephens cemetery Willunga.

Ironically, the old St Stephen’s Church had fallen into disrepair, which was regretted by the people of Willunga. A collection was taken up to repair it. Linie was one of the collectors, and his was the first funeral service to be conducted in the refurbished church. 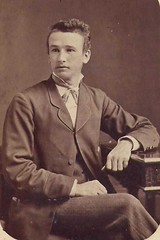 Lilini Jacobs installed the town weighbridge (now dismantled) early in the 1900s in response to the demand for such a facility. It was situated in front of his Willunga Store. It was purchased by the Willunga Council, probably about 1916, after his death.

Do you remember Jacobs, Lilini ? Then Join up and add your memory here.

This page was last modified on 15 March 2019, at 17:42.Text on this site is available under the Creative Commons Attributions/Share Alike licence; additional terms may also apply. See our Terms of Use.
About Now and Then | Places | People | Events | Organisations | Things | Contact us