Sydney Arthur Jacobs (known as David) was born in Willunga on 19 August 1890, the oldest child of Jacob Sydney Jacobs and Mary Jacobs (nee Annis) who had married in June 1889. They had four children:

Sydney was a blacksmith like his father. He was a member of the Willunga IOOF Lodge and Willunga Football Club and was a cousin to Connie Jacobs.

He enlisted and in June 1915 the Cheer Up Society farewelled him from Willunga. He embarked from Melbourne on 27 October 1915, to serve in Egypt as a Trooper (Shoeing Smith) with the 3rd Australian Light Horse Regiment. His younger brother Len had enlisted in 1914.

Sydney was fatally wounded by a bomb blast at Kantara during the action to defend the Suez Canal. He died at the 1st Light Horse Field Ambulance on 1 June 1916 and was buried at Kantara War Memorial Cemetery, Egypt, aged 25 years.

He is remembered in Willunga on his mother’s headstone (Mary Jacobs) in the St Stephen’s Cemetery, the War Memorial and the Roll of Honour in the Willunga Show Hall. 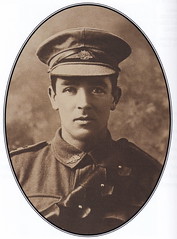 Do you remember Jacobs, Sydney ? Then Join up and add your memory here.

This page was last modified on 12 September 2020, at 17:04.Text on this site is available under the Creative Commons Attributions/Share Alike licence; additional terms may also apply. See our Terms of Use.
About Now and Then | Places | People | Events | Organisations | Things | Contact us