Connie (Constance) Jacobs was born on 26 July 1902, the daughter of Lilini Inkerman Jacobs and his third wife, Ethel Elsie Morey. She had three sisters, Beatrix, Jeanette (Nettie) and Eunice. At the time when Connie was born, her father owned and ran the general store in Willunga. He was a member of the District Council of Willunga. Her family were active members of the Anglican Church and Connie and her sisters are noted appearing at St Stephen’s Concerts and working on stalls for the Anglican Church fair. During her school years, Connie was a frequent entrant in the academic competitions for children at the Willunga show.

By 1916 her father had died and her mother, Ethel, continued to manage the business until 1927. In 1920 Ethel also opened a refreshment room and welcomed passengers on the tourist bus as a ‘half way stop’ between Adelaide and Victor Harbor.

Connie attended Willunga Public School and, on Arbor Day 1915, she, Eunice and their mother planted three of the trees in St Andrews Terrace in honour of their cousins serving in World War 1, Pte William Jacobs, Pte Len Jacobs and Pte Sydney Arthur Jacobs. The trees were to be known as ‘The Patriotic Row’. Connie and her mother, Ethel, featured in most of the Cheer Up Society events from 1914, contributing musical items. Six of Connie’s cousins served in World War 1 and two did not return.

After the War, in 1926, Connie married Basil Dunstan, the manager of the Willunga-Bangor (later Australian Slate Quarry) Company. Basil had built his house, Glantawe, at 20 St Andrews Terrace, in 1925. This ‘house of slate’ was designed by his father John Dunstan, an architect who purchased the Bangor Quarry in 1917 and set about reviving the industry. They had a son, Martin, in 1927 and, in 1934, they separated. Connie lived in Gladstone and, when she died in 1984, was buried there.

Connie’s parents and paternal grandparents are buried in the Willunga Anglican Cemetery. Her grandparents were James Sibley Jacobs and Sarah Jacobs (nee Edwards). James was a quarryman who emigrated from Cornwall with his wife and family to Pennsylvania, later continuing to Australia in 1864, settling in Willunga. 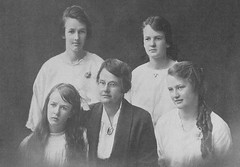 Do you remember Jacobs (formerly Dunstan), Connie ? Then Join up and add your memory here.

This page was last modified on 14 September 2020, at 17:43.Text on this site is available under the Creative Commons Attributions/Share Alike licence; additional terms may also apply. See our Terms of Use.
About Now and Then | Places | People | Events | Organisations | Things | Contact us