Alexander Jefferies was the first Station Master at Willunga Railway Station when it opened in 1915.

Alex was the fourth child of Albert Atkins Jefferies and Elizabeth Charlotte Jefferies who had come to Australia on the ‘Adamant’ from Cardiff, Wales in 1865.

He was born in Adelaide in September 1867. In April 1892 at Bagot Wells Alex married 32 year-old Alice May Patterson. They had one child named Evelyn Daisy May who was born in February 1893.

Alec and his wife were members of the Willunga Methodist Church where he was a local preacher and his wife Alice was a foundation member of the Ladies Sunshine Guild.

While they were living in Willunga, Alex’s parents came to stay with him. During this time, his father Albert Atkins Jefferies died in November 1917. He is buried at the Willunga Methodist cemetery.

Subsequently Alex and his family moved to Balaklava where Alex was employed as the Station-Master.

Alex's wife Alice died in March 1922 while they were living at Balaklava. His mother Charlotte, who presumably lived with them after her husband's death, died at Balaklava in September of the same year.

His next appointment was to Brighton Railway station.

Following his retirement from the South Australian Railways Alec was presented with a gold watch in recognition of his services. 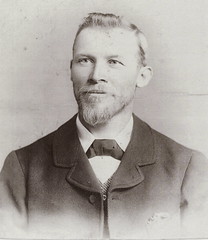 Do you remember Jefferies, Alexander ? Then Join up and add your memory here.

This page was last modified on 12 May 2016, at 17:54.Text on this site is available under the Creative Commons Attributions/Share Alike licence; additional terms may also apply. See our Terms of Use.
About Now and Then | Places | People | Events | Organisations | Things | Contact us