The original 4 roomed cottage at the front was the home of Thomas Kain (Cain, Keane, Kane) and his family in the 1850s and 1860s.

The Kain family were early Willunga settlers whose 3 acres of wheat and 3 cattle were listed in the Land Returns of 1843. Thomas was a dairyman in Willunga after his marriage to Sarah Heslin in St Joseph's Church in 1858. They had five children, one of whom, Michael, became a quarryman and married Pauline Brown.

Descendants understand that members of the Kain/Keane family at times also lived in McCaffrey Cottage in St James Street and in Rowland's Cottage on the Main Road to McLaren Vale. An early resident referred to 8 St Luke's Street as Tom Kain's 'second' cottage.

The Fox family were later occupants.

The cottage has been re-roofed and extended but retains the original brick chimneys and casement window joinery. The pug at the front has been rendered and incised with lines. 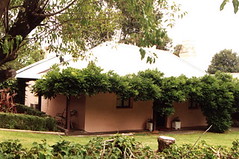 Do you remember Kain's Cottage 8 St Lukes Street ? Then Join up and add your memory here.

This page was last modified on 26 July 2021, at 16:00.Text on this site is available under the Creative Commons Attributions/Share Alike licence; additional terms may also apply. See our Terms of Use.
About Now and Then | Places | People | Events | Organisations | Things | Contact us