Thomas Kain (or Keane) was born in 1832 in Ennistymon, County Clare, Ireland. He was the son of John Joseph Keane (1800-1860) and Nora (nee Flynn) (1802-1845). There are at least six different spellings used for his surname – Kain, Keane, Kean, Kane, Kyne and Cain. Of Thomas’ three sons, two used Kain - Michael and John - and one used Kean - Thomas junior. The next generation used Keane. Thomas does not appear to be related to the Kane family who were in Willunga in the 1840s.

Thomas was aged 18 years when arrived in South Australia on 25 May 1851 aboard Catherine from Liverpool. He was Catholic and, aged 26 years, he married Sarah Cecilia Hesham (or Heslam or Haslen) (1831-1911), aged 27 years, at St. Joseph’s Catholic Church, Willunga on 9 November 1858. They had five children:

Thomas was an agricultural labourer, quarryman and, later, a dairyman at Willunga. Thomas, his wife Sarah and their growing family lived in the cottage on Lot 38 at 8 St. Lukes Street for probably approaching 50 years, from about 1858 or before, until his death in 1903. This cottage now has City of Onkaparinga Heritage Listing #5515. In 1882, Thomas Kain purchased Lots 18 and 19, across the road from his house at 8 St Lukes Street, from John Hill & Co’s coaching business. 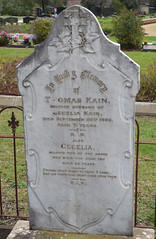 Do you remember Kain, Thomas ? Then Join up and add your memory here.

This page was last modified on 27 July 2021, at 11:14.Text on this site is available under the Creative Commons Attributions/Share Alike licence; additional terms may also apply. See our Terms of Use.
About Now and Then | Places | People | Events | Organisations | Things | Contact us