James Frederick Knipe MRCS was a committed medical practictioner until his death in 1870 at Aldinga. We know little about his early life, but a letter he once wrote to his sisters was addressed to Hanley Castle, Worcestshire. Research has shown that one Francis Knipe (69 yo, Solicitor) was living at 1 Bourne Villa, Hanley Castle, Worcestorshire in 1891. His age indicates that Francis may be a brother to James. Francis’s birthplace is shown as Greenville, Co Cavan, Ireland. Although Knipe is a common name in Cavan and Armagh, no birth records for either James or Francis have yet been found. It is clear, however, that the Knipes of Cavan were landed gentry who had among their ranks a large number of doctors, solicitors and ministers.

James was a ship’s Surgeon Superintendent on three immigrant vessels. In the letter written to his sisters during the voyage on Sea Queen (1850), he noted: ...I have had a great deal of sickness in the ship...the Cabin passengers...are all snobbs shopkeepers & their servants...[they] can hardly be called vulgar but [are] not ladylike... I will write again when I am settled… in the Wakefield or at the Strathalbin Mine. Despite his expressed intention to go to elsewhere, James settled in Noarlunga after his voyage on Sea Queen. An advertisement in May 1850 shows him to be the medical successor in Noarlunga to a C. Lloyd.

His life was varied. He was a memoralist advocating for the construction of the Goolwa Railway and port facilities at Encounter Bay and delivered triplets at Morphett Vale. Unfortunately, he also went into debt, and was forced by the Courts to sell off furniture and other items to pay back the money. By 1853, his financial situation must have prospered as he posted a reward for the return of what was clearly a much-loved pet, Bully, a white bull terrier who Knipe suspected was stolen. We do not know whether Bully was ever returned but life became increasingly busy. He was appointed as the medical practitioner attending the destitute in Aldinga and an accredited vaccinator under the Compulsory Vaccination Act of 1854, intended to eradicate smallpox. He was also a member for the Southern Racehorse Committee and the Lodge Surgeon for the Loyal Noarlunga Lodge of Oddfellows. James was a keen supporter of local cricket played between Willunga and Morphett Vale and occasional teams from Adelaide. In 1856 he secured regulation cricket material from England.

Although he was the medical officer of Aldinga, he was also called to Noarlunga and other places to aid the sick and injured. In 1854, as shown above, he acted as Surgeon Superintendent on Switzerland from Liverpool to Sydney. It seems likely that this break in his residence at Noarlunga was the impetus for moving to Aldinga. He still continued providing medical services at Noarlunga after his return.

In 1855, Nashwauk was wrecked at the mouth of the Onkaparinga River at Moana. Dr Knipe had a role in tending sick passengers from the ship as the ship-surgeon was disabled by intoxication. This was not the only time that James had to fill in for a deficient medical colleague, with less happy consequences. In 1869, a little girl fell under the wheel of a dray. A Dr Smales, the Noarlunga medical officer, refused to attend the accident, and by the time Dr Knipe was fetched, the little girl was dead.

In 1867 a tender was announced for a house to be built in Aldinga for Dr Knipe. It is probable that this is the “Doctor’s House” in Little Road, White’s Valley, now McGaffin Farm.

It seems that he suffered from ill-health for a considerable time. One week before he died, James married Elizabeth Nancarrow/Nacarrow, also from Aldinga. Hence he appeared in the newspapers for three consecutive weeks, once on the occasion of his marriage, second on the occasion of his death and third on the occasion of his funeral. He was eulogized as follows: Doctor Knipe was a gentleman of first-class ability, of sterling integrity and practical wisdom. His professional abilities were of the highest order, which is fully testified by the extraordinary amount of practice he had gained in the South, where his loss will be deeply regretted by the general public — no less than by his more immediate friends, as leaving in our community a void not easily to be filled by a man of equal merit and sterling worth. He was ever ready and willing in his professional capacity to render his skilful assistance with a generous feeling, and administer to the wants of the poor as well as those of the rich.

James left £40 to his servant Ann, and the rest of his estate to his new wife. He died without issue. He is buried in St Ann's cemetery, Aldinga. 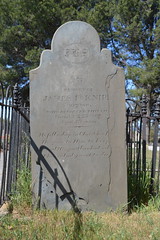 Knipetz remembers: James Frederick Knipe was born in Wales around 1822 and baptised at Llanbeblig, Caernarvon on 10 Oct 1822. He was the son of Dr George Frederick Knipe (1781-1849) and Mary Anne Williams (1785-1844). In 1841 he can be found living with his eldest brother, George Frederick Knipe, a surgeon, in Old Stratford, Warwickshire. His occupation is listed as apprentice Surgeon.

This Knipe family can be traced back to Belturbet, Cavan.

Do you remember Knipe, James Frederick ? Then Join up and add your memory here.

This page was last modified on 5 December 2020, at 07:02.Text on this site is available under the Creative Commons Attributions/Share Alike licence; additional terms may also apply. See our Terms of Use.
About Now and Then | Places | People | Events | Organisations | Things | Contact us