Taken from the book A picture of fortitude

"Annie was born in Willunga in 1867, the tenth and last child of Thomas and Rose Turpin (nee Genery) Lasscock. She was the youngest sister of Mrs Herbert Allen (Caroline) and worked for many years as Willunga's librarian. As well as the Cheer-Up Society, of which she was a founding member, she was also involved in numerous local committees and clubs, including the Croquet Club and Show Society. Annie sang in the Church of England ladies' choir, and contributed her musical talents to many of Willunga's concert entertainments. Her older sister Rosie was also a competent musician. Josephine Aldam, a former Willunga resident and daughter of Wilfred and Eva Aldam, recalls that, when she was a child on her way home from school, she would often stop outside Rosie and Annie's High Street home [at 12 High Street] to tie her shoe laces- not that they really need tying: she just wanted to listen to the piano being played. Annie never married and continued to live with and care for her parents. Even after they died she rarely left Willunga, until her own ill health in later years forced her to move to a private hospital in Goodwood. She died peacefully in her sleep on 6 October 1952, aged 87, and was buried in St Stephen's Church of England Cemetery in Willunga." 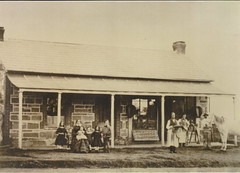 Do you remember Lasscock, Annie ? Then Join up and add your memory here.

This page was last modified on 28 September 2021, at 16:56.Text on this site is available under the Creative Commons Attributions/Share Alike licence; additional terms may also apply. See our Terms of Use.
About Now and Then | Places | People | Events | Organisations | Things | Contact us