Many of Willunga’s early residents did not prosper and endure to become prominent citizens in the community. The story of Johan Franz Anton Laufkotter illustrates how difficult work and family life could be.

Johan Franz Anton Laufkotter, later usually known as Francis, arrived in Adelaide in December 1847 from Paderborn in Germany on the ship Herman von Beckereth which had sailed from Bremen via Rio de Janeiro. The journey took nearly 5 months.

Two years later in December 1849 Francis Lauskoetter (sic) married Emelia Dietz in the Catholic Church in Adelaide. Emelia had arrived in Adelaide in May 1849 on the Dockenhuden from Hamburg via Melbourne. Travelling with her were Maria Dietz and Munica Goescher, possibly her sister and mother, but not known for sure. However, in her early years in SA Emelia often used the surname Goetscher, especially when registering the births of her youngest children with her local parish church.

Technically Francis needed to be naturalised to buy land in the Colony, so he applied for a Certificate of Naturalization which he received from Captain Charles Sturt, Colonial Secretary, in December 1850. Then in 1851 he purchased from Thomas Kell Allotments 8 and 9 in section 248 in Willunga. This one-acre block was bounded by Kell Street and a government road (now Hill Street) and was next door to William Toll’s Alma Hotel which opened in 1851 on Lot 14. (1)

Laufkotter’s house and shop was soon established in the town, albeit with a mortgage. He was not only a general storekeeper but also a shoemaker and candle maker. His original shop building is still in use at 8 Hill St.

Francis and Emelia had seven children, only three of whom survived to adulthood. First son John was born in December 1850. A daughter Wilhemina was baptised in 1852 and a second son Bernard was born in 1854, followed by Joseph Antony in July 1855. In a sad story, Francis and Emelia lost three of their four young children in 1855 – Bernard passed away aged 10 months in March, 5-year old John died on 3rd December and 6-month old Joseph Antony died on 14 December.

In 1862, the Laufkotters provided clothing for Ellen Fitzclarence who had stayed with them for 16 days when her child was born. They applied for reimbursement from the Destitute Board but were refused.

Francis and Emelia were involved with St Joseph's Catholic Church in Willunga. Their children were baptised there and four of their children were buried in the cemetery in unmarked graves. Tickets for a Grand Concert and a lecture by Rev Tennison Woods on “Life in the Bush” in January 1868 were on sale from Francis Laufkotter.

However, business was difficult, and some customers were unable to pay their debts in spite of several court cases. It was reported in the Chroncle in 1867 that, for some time, Mr Laufkotter had missed various articles from his shop, always on Sunday nights. One Sunday night he hid inside the shop. Shortly later the door opened and a well-known woman crept quietly in. He seized her and got a scratched face in return. As he recognised her he let her go and applied the next day for a warrant.

In August 1871 Francis Laufkotter was insolvent, with debts of over £921 and assets of £669 including a bank balance of only £15-4s. At the insolvency proceedings it was concluded that the business must have been quite small as only £292-6s-3d worth of goods had been purchased since June 1868. Insolvency was blamed on depreciation in the value of town lots in Willunga and the business not paying expenses. However, it was also noted that the owner had not kept accounts from which profit and loss could be ascertained.

An auction was held in August 1871 to sell the contents of the store comprising crockery, glass, drapery and sundries, as well as 9 acres of growing crops, wheat and oats.

A further auction was held on October 1871 to sell the land and buildings on Lots 8 and 9 including a store and dwelling house of 10 rooms roofed with slate, together with outbuildings, garden, etc. It presumably did not sell and was re-advertised and sold in 1873.

Meanwhile, Francis Laufkotter and family had moved to Kadina in 1872 where he again set up as a storekeeper and involved himself and his family in the activity of the Catholic Church. From 1873 onwards, a Miss Laufkotter was mentioned as helping with church stalls and was president of the Church Choir which she accompanied on the harmonium. Presumably this was Wilhemina Laufkotter, daughter of Francis and Emelia, who would have been in her early twenties at this time.

In 1873 Francis selected several sections of Crown land in the Hundred of Booyoolee for £1 per acre, on payment of a deposit of 10 per cent.

However, history repeated itself and Francis Laufkotter was soon in financial difficulties and various debtors were brought to court in an effort to collect unpaid debts. In 1875 an auction was held to sell some of the stock of Laufkotter’s Kadina Store in an effort to pay his creditors under the Insolvency Act.

The family appears to have stayed in Kadina. The death of Emelia Laufkotter, wife of Francis Laufkotter, is recorded at Kadina on 11 December 1883 aged 65 years. Francis’ fate is so far unknown. 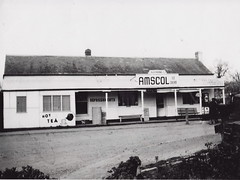 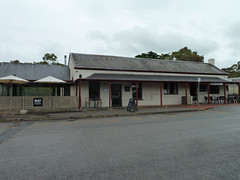 Do you remember Laufkotter, Johan Franz Anton ? Then Join up and add your memory here.

This page was last modified on 16 April 2019, at 10:13.Text on this site is available under the Creative Commons Attributions/Share Alike licence; additional terms may also apply. See our Terms of Use.
About Now and Then | Places | People | Events | Organisations | Things | Contact us