Nicholas Male, aged 26 years, married Margaret Cobbledick, aged 21 years, (1821-1890) on 19 Nov 1842 at St. Teath, Cornwall. She was the daughter of William Cobbledick and Philippa (née Lobb) of St. Teath. Both of them must have been illiterate as they made their mark on their marriage certificate. They had four children, one of whom died young in Cornwall:

Nicholas Male (aged 32 years), his wife Margaret (27) and their son Nicholas (8) arrived aboard Bussorah Merchant in Port Adelaide on 9 Nov 1848. Travelling with them was Frederick Richard George Martin and his wife Mary Ann (nee Cobbledick – the sister of Margaret). He was listed as an agricultural labour. However, this may have been to help him obtain assisted passage. There was, over a period of time, an exodus of families from St Teath, many of whom were related to Nicholas through his wife, Margaret.

Nicholas Male senior was a laborer, quarryman, slate dresser and slate merchant in the Willunga District. After a short period of working in the Willunga quarries, Nicholas went to Castlemaine with his brother-in-law, Frederick Martin, and then to Bendigo, where he succeeded in finding gold. Their gold prospecting venture meant that he and other St Teath connections, James Kernick and William Cobbledick, had the capital to work a quarry belonging to Thomas Martin. In 1855 Nicholas Male went into partnership with James Kernick and William Cobbledick to take out a 21-year lease on the Bangor Slate Quarry, but ill health forced him to leave the partnership in 1864, and he died three years later.

He paid rates on half an acre and a house in the township from 1853 to 1858 (probably lot 143 – below). He had the building at 16 St Georges St built in the early 1850’s as two separate dwellings for himself and Frederick Martin. They were identical in size and layout, with a living room and lean-to kitchen on the ground floor, and bedrooms located on the upper storey (road level). Nicholas Male of Willunga, Slate Quarrier, purchased part of Lot 143 on 28 Nov 1862 = with a 66 foot frontage on St. Georges St and 305 feet deep and he owned it until his death in 1867. He also owned part of section 257 from 1864 to 1866.

Nicholas Male, aged just 50 years, died on 7 May 1867 at his residence, Brompton, in St. Georges Street, Willunga and he is buried in the Wesleyan Methodist Church Cemetery, Willunga. His widow, Margaret, remarried to Joseph Gordon and they moved to Victoria. 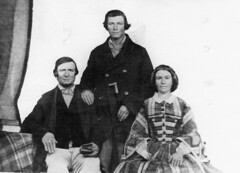 Do you remember Male, Nicholas (senior) ? Then Join up and add your memory here.

This page was last modified on 23 June 2020, at 15:01.Text on this site is available under the Creative Commons Attributions/Share Alike licence; additional terms may also apply. See our Terms of Use.
About Now and Then | Places | People | Events | Organisations | Things | Contact us