Thomas Martin was born in Devon, England in 1797. His parents were Richard and Sarah Martin. He married Mary Evans (1806-1887) in West Putford in Devon, England on 27th December 1827. Mary was also born in Devon and her parents were John and Mary Evans (née Woodcock). Thomas Martin emigrated with his wife, Mary, their 5 eldest children and his father-in-law, John Evans, to Australia in September 1840 on board Lysander. Thomas and Mary Martin had 7 children:

Thomas’ occupation was listed as Hotel Keeper and Farmer. The family lived at Marion and Plympton for a few years where they farmed some land. By 1846 they had settled at Port Willunga and occupied section 386 of Port Willunga.

Thomas set to work building a large family home on his section of land at Port Willunga. He soon realised that there was a need for a hotel in the busy port, so he turned his home into The Pier Hotel. The building became locally know as “Uncle Tom’s Cabin”. It was licensed from 1852 until his death in 1862. The family also ran a very successful farm and leased many more sections of land that they also farmed. Their religion was recorded as Church of England/Anglican. Thomas and Mary may have both been illiterate as some of their signatures on documents appear as a mark “X”. These documents include Thomas’ Will and Mary’s Marriage Certificate to Henry Skellett, her second husband.

Thomas, aged 65 years, died on 12 September 1862 after a long illness and was buried in St Stephen’s Anglican Cemetery, Willunga. He left everything to his wife, Mary, in his will. When she died, it was to be divided between their children. The executors of his will were Thomas Whinnerah and John Pengilly, who had been on board Lysander with the Martins.

Mary remarried in 1864, to Henry Skellett, at the Wesleyan Church, Pirie Street, Adelaide. Henry was a local butcher and uncle to Francis Hart. Mary and Henry did not have any children. Henry died in 1904. Mary died 1887 at Port Willunga and is buried with Thomas in St Stephen’s Anglican Cemetery, Willunga. 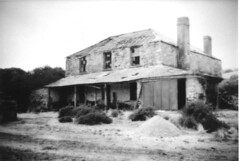 Do you remember Martin, Thomas (Port Willunga) ? Then Join up and add your memory here.

This page was last modified on 7 October 2021, at 16:47.Text on this site is available under the Creative Commons Attributions/Share Alike licence; additional terms may also apply. See our Terms of Use.
About Now and Then | Places | People | Events | Organisations | Things | Contact us