Thomas Maslin was born around 1805 in Berkshire, United Kingdom. He arrived at Kingscote in 1836 on the ship, Tam O’Shanter. In his obituary, it was noted that Thomas helped build the first government house on Kangaroo Island. He married Sarah Shephard in Trinity Church, Adelaide, June 4 1838, apparently while the church was still without a roof! Sarah Shephard arrived in the ship Trusty at Port Adelaide in May 1838, which indicates that they had known each other and planned to marry in England. It is probable that Thomas moved to Adelaide around the time of his marriage.

Thomas built the Queen’s Arms tavern in Adelaide and remained in business from December 1838 to 1846. He then sold the business to become a storekeeper. He and Sarah underwent a spiritual conversion to Methodism at the old Gawler Place chapel, probably around 1845, which would explain why he sold the Tavern. He became a member of the Total Abstinence Society and became very active in methodist causes. In 1848, the Primitive Methodist chapel in Payneham celebrated its first service; the land the chapel was built on was donated by a Mr Maslin, probably Thomas. He was also a Trustee of the first Methodist chapel in Unley. In 1851, he is recorded as being a Trustee of the Wesleyan Methodist Pirie Street Chapel and was still active in 1853.

While in Adelaide, Thomas and Sarah had three sons, Thomas William (b.1839), Frederick (b.1841) and Alfred (b. 1844). In the mid-1850s, Thomas and Sarah moved to Aldinga because of Sarah's health, and in 1855 a tragic drowning incident is described as occurring near “Maslin’s water”.

Thomas was well-known in the Aldinga community. He was active on Aldinga’s District Council from around1859 to1870s, and was appointed as Chair in the 1870s. He was also on the organising committee promoting the formation of Aldinga’s public library commencing in 1860. Both Thomas and Sarah were also active in the Methodist movement, leading classes in Noarlunga and Aldinga and donating freely to causes such as church construction, missions and philanthropic schemes.

In 1866, the Albert District of the Independent Order of Rechabites opened in Aldinga, and Thomas was elected the Treasurer, while his son, Frederick, was the Chief Ruler. Thomas also supported the Aldinga Band of Hope, a youth movement dedicated to abstinence and self-improvement, and donated money to temperance causes.

Thomas died on 6 August, 1890, and Sarah followed him in death a little over a year later on 16 November 1891. They are buried together in Aldinga Uniting Church cemetery.

Today the Maslin name is given to Australia’s first official nude beach, Maslins Beach. It is doubtful that Thomas would have approved. 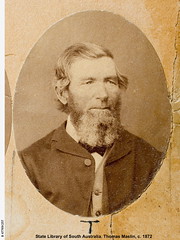 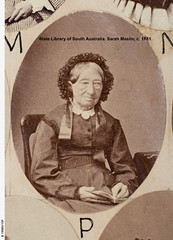 Do you remember Maslin, Thomas ? Then Join up and add your memory here.

This page was last modified on 18 February 2020, at 07:52.Text on this site is available under the Creative Commons Attributions/Share Alike licence; additional terms may also apply. See our Terms of Use.
About Now and Then | Places | People | Events | Organisations | Things | Contact us