Robert McGowan was born on 15 June 1830 at Cregans, Co. Armagh, Ireland, the son of William McGowan, farmer, and his wife, Sarah Donaldson. He was baptised on 21 July 1830 at Mountnorris Presbyterian Church, Newry, Co. Armagh.

He married three times. Firstly, on 26 October 1853 in Belfast, Ireland he married Sarah Amelia Spackman, daughter of William Spackman Esquire, a merchant clothier. She died on 2 January 1875 in Liverpool, Lancashire, England. Known children of this marriage were Julius Arthur Francis McGowan (born 1866 in Liverpool and died 1918 in Belfast, Ireland) and Horace Alexander Heywood McGowan (born ca 1869 in Liverpool and died 1919 in Sydney, Australia). He remarried to Emilie Howard Burton, aged 38, at Trinity Church in Melbourne on 1 September 1876. Robert was described at that time as of Gladstone, South Australia. Emelie McGowan died on 19 February 1881 at Willunga and was buried at St Stephen’s Church of England Cemetery, Willunga. Robert then remarried again on 14 November 1882 at St John’s Church, Adelaide, to Ada Jane Addison, daughter of Thomas Plummer Addison, Chief Clerk of the Customs Department.

McGowan gained his medical qualifications at Queen’s College, Belfast, Ireland, in 1848 and Glasgow, Scotland, in 1851. He practised at Warrenpoint, Co Down in 1854 and Tandragee, Co. Armagh from 1858 until 1860. In December 1870, he arrived in Melbourne as the surgeon on the SS Great Britain and registered in Victoria as a medical practitioner in 1873.

He must have returned to London at some time after 1873, as he is recorded travelling back to Australia on the Astracan from London as the surgeon superintendent, arriving at Port Adelaide in July 1876. Of the nine deaths during the voyage, Dr McGowan noted that these passengers were already in a ‘delicate state of health’ when they embarked. On 4 October 1876, he registered with the South Australian medical board and, in June 1877, he was appointed a Justice of the Peace.

On 3 August 1880, McGowan became a foundation committee member of the Willunga Institute and the District Council of Willunga rates note that he had township allotments, a house, and cottages in Willunga. In July 1886, he purchased St Anne’s Lodge. During his almost ten years living in Willunga, he became actively involved in community affairs: a wine judge in March 1882 at the Willunga Agricultural Society; an auditor of St Stephen’s Church in April 1882; supporting the formation of the Willunga Volunteer Rifles in May 1885 and elected Chairman of the District Council in July 1885 and July 1886. In September 1887, he applied to the Destitute Board for blankets for a Mrs Green of McLaren Vale. In July 1888, Dr McGowan attended the Star of Greece shipwreck at Port Willunga.

In March 1890, Dr McGowan advertised his household furniture and effects for sale by auction, as he had sold his practice and was leaving the district. St Anne’s Lodge was transferred to Dr Francis Counter in January 1891.

From February 1891, Dr McGowan practised medicine at Port Germein; in October 1891 he resigned from the Military Forces as surgeon and, by June 1893, he had moved to Mount Barker. In October 1893, he advertised that he was leaving Mount Barker to take up the position as resident medical officer of the Silverton Hospital, New South Wales, on a salary of £150 per annum. In August 1896, he moved to Port Gawler, South Australia.

Dr McGowan died of Bright’s Disease of two years duration on 10 November 1898 at his residence at Mallala. Of his time in Willunga, he was described as ‘a thorough gentleman, [who] performed many acts of kindness in the district … . His many acts of benevolence and kindly manner endeared him to all’. He was buried at St Stephen’s Church of England Cemetery in Willunga. His third wife, Ada, died on 22 August 1923 at Magill. 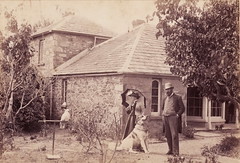 Do you remember McGowan, Robert (Doctor) ? Then Join up and add your memory here.

This page was last modified on 23 September 2021, at 11:08.Text on this site is available under the Creative Commons Attributions/Share Alike licence; additional terms may also apply. See our Terms of Use.
About Now and Then | Places | People | Events | Organisations | Things | Contact us