Miss Serena Thorne (1842-1902) appeared at the Oddfellows’ Hall in Willunga . What was unusual about this appearance was that Miss Thorne preached a sermon! Miss Thorne was a Bible Christian, but people from other churches would eagerly attend her sermons -- in Willunga, the Register correspondent described the attendance as “overflowing”.

Woman preachers were controversial in the 19th century. Although the Wesleyan Methodists initially approved of women preaching, this liberal attitude changed after the death of John Wesley. With the split of Methodism into several schools of belief, women preachers were embraced by the Primitive Methodists and Bible Christians even though the Wesleyans no longer approved. One justification for women preachers was from James 1:17: every good gift and every perfect gift cometh down from above, from the Father of lights

The opponents of women preaching, however, had their own biblical arguments. At a crowded sermon at Normanville, Miss Thorne noted that an anonymous letter writer had sent her texts of the scripture which argued against allowing women to preach. Miss Thorne then proceeded to demolish these arguments (Adelaide Observor, 10/12/1870, p. 4).

Some men, however, could not be convinced. When Miss Thorne preached at the opening of what is now the Inman Valley Uniting Church, the violent thunderstorm on that day was attributed by some sour parishioners to God’s ire at a woman preaching . .

Although Miss Thorne (later, Mrs Lake) was a very well-known woman preacher, Willunga district also had one of our own, Mrs Thirza Middlebrook. 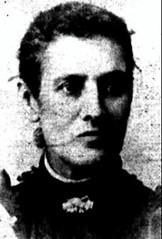 Do you remember Miss Thorne preaches at Willunga ? Then Join up and add your memory here.

This page was last modified on 9 February 2019, at 19:29.Text on this site is available under the Creative Commons Attributions/Share Alike licence; additional terms may also apply. See our Terms of Use.
About Now and Then | Places | People | Events | Organisations | Things | Contact us