Isaac Needham and his wife, Martha (nee Gregory), arrived in SA from Plymouth on the ship Marion on 10 February 1849.

They initially lived in a cottage in the Payneham/Magill area, where five children were born:

Isaac Needham tried his luck on the Victorian goldfields and, in March 1852, sent to his wife eight ounces of gold via Tolmer’s first gold escort from Mt Alexander. In July that year, Needham bought Section 454 and later Section 455, between Willunga and McLaren Vale. In February 1853 he formally cautioned anyone against cutting or removing timber from these sections. In 1853, Isaac gave evidence that, while coming home from town to Payneham, he saw a grass fire being lit by three boys. In 1854, he signed a petition supporting Charles Fenn in the East Torrens election.

The Needham family moved to Willunga sometime between 1856 and 1859. In 1859 Mr. Isaac Needham’s cottage, a snug cottage in East Payneham with an acre of garden and 3 acres of good potato land, was advertised for lease. In 1864, Isaac stated that he had resided in the Willunga area for 8 years.

Isaac Needham is listed as a farmer in Willunga in the SA Directories from 1864 to 1872. In August 1866, he purchased Lots 81 and 82 in Bishop Street, in the Willunga township. It is now 10 Bishop Street and known as The Gums. Isaac ran a licensed wine store there from 1869 until at least 1880. In 1893, he purchased the adjoining property at lot 72 (9 St. Jude’s Street) from William Matthew Oliver.

Isaac Needham involved himself in local affairs. At a meeting of ratepayers in June 1864, claiming some experience as a bullock driver, he spoke about the disgraceful state of the district roads. In 1871, he signed a petition in support of Thomas Elder’s nomination for election to the Legislative Council. On 21 December 1882, Isaac Needham was appointed Bailiff of the Local Court at Willunga replacing J. C. Thornton, who had recently died.

Needham’s estate, administered by John Binney, comprised an 80-acre section and 4 allotments, with two cottages, in Willunga township. His home property (Lots 81 and 82 and 72) was sold to his son-in-law Edward Hunt, farmer of Willunga, who took up residence there with his family. 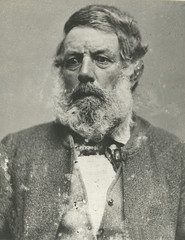 Do you remember Needham, Isaac ? Then Join up and add your memory here.

This page was last modified on 13 February 2021, at 14:48.Text on this site is available under the Creative Commons Attributions/Share Alike licence; additional terms may also apply. See our Terms of Use.
About Now and Then | Places | People | Events | Organisations | Things | Contact us