Accurate records of the Bush Inn remain inadequate but, on balance, information gleaned from contemporary newspapers supports the following history. If any further information is available, the Willunga National Trust would be pleased to receive it.

This is the third hotel in Willunga to be called the Bush Inn. The first was a single-storey, thatch-roofed small building built by the Atkinson family and initially called the Lincolnshire Inn. It was located on the south-eastern corner of St James Street and Atkinson Drive. 1

The second Bush Inn was a distinctive two-storey inn, built from locally-made Atkinson’s bricks, most likely in the early 1840s. 2 It was at the rear of the present building, but overlooked St James Street. The first licensee was Mary Ann Atkinson and another early licensee was John Snoswell (1845-1847). The dining room, known as the Long Room, measured 50 feet by 18 feet and was often used for dinners, public meetings, Court hearings and meetings of the District Council. At least one inquest was held here, in 1853, before the Court House was built. The local Hunt Club set out from here for ‘the days hunt through the ranges after Kangaroos, Wild Dogs and Cattle’. This Inn was demolished to make way for the current building. Some of its red brick foundations survived at the rear of the present hotel until recently, when subdivision occurred.

The third Bush Inn, the present building, was opened in 1882 with a frontage to High Street. 3 In that same year a servant had a lucky escape when she slipped into the well while drawing water, remaining trapped for an hour or more until rescued. Following renovations in 1900, the licensee, Mrs Broderick, advertised it as a pleasant holiday destination for coach travellers, offering good accommodation and moderate terms.4 Willunga sheep, cattle and horse markets were held in the Inn's large yards.

The Inn was known as the Canberra Hotel from 1915 to 1973. The licenseee in 1917 was charged with trading after 6 pm but was given the benefit of the doubt, it being argued that the prosecuting constable's watch was at odds with the Bar-room clock. Charges alleging that seven men were drinking in the bar after hours were consequently withdrawn.

In 1927 the hotel was renovated again and ‘from the Verandah a magnificent view [was] obtained in the seaward direction.’ 5 Hotel patrons and by-standers were severely shocked when in 1935 a car careered out of control down the precipitous Willunga Hill, killing two people and severely injuring three others.

Inside, the present Bush Inn, the Cascade Room has remained untouched since 1901. The early slate roof has been replaced by galvanised iron and a bull-nose verandah has been added to the original building. 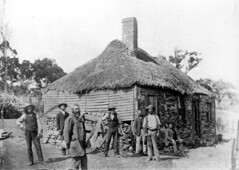 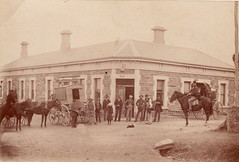 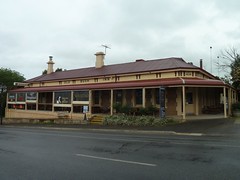 Do you remember Old Bush Inn ? Then Join up and add your memory here.

This page was last modified on 8 May 2020, at 10:22.Text on this site is available under the Creative Commons Attributions/Share Alike licence; additional terms may also apply. See our Terms of Use.
About Now and Then | Places | People | Events | Organisations | Things | Contact us