Willunga is going to be one of the jewels set in the railway necklet of South Australia... perhaps a turquoise of a curious slate colour. The Register, 16 January 1915, p. 10.

January 20, 1915 was a time of great excitement for the people of Willunga. Finally, after years of delays, the town of Willunga was to be connected to the city of Adelaide by rail. The railway was declared open by his Excellency the Governor Sir Henry Galway and the inhabitants of Willunga enjoyed a gala day. An ordinary train left Adelaide at 10.00am to transport excited city dwellers and then at 11.00, a special train steamed out carrying VIPs including the Governor.

The special train was met by the local railway committee and prominent Willunga residents. Mr R.F. Atkinson, who was chair of Willunga District Council, and young Gordon Richards stretched two pieces of ribbon across the track. Gordon Richards was the son of Harry Richards Richards, Harry, who is thought to have died from the strain of promoting the railway as First Secretary of the Railway Committee. After the Government proclaimed his pleasure at being asked to open the railway, the train steamed through the ribbon, and the railway was officially open! 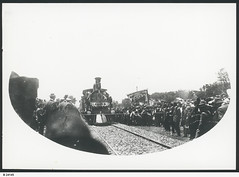 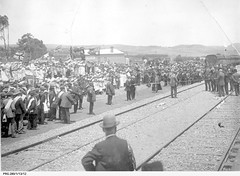 Memories of Opening of Willunga Railway

The opening of the Willunga Railway was a highlight of 1915. The school children went on a special train ride to Brighton, where they walked along the beach and then returned to Willunga. They were very disappointed that they had no time to play on the beach.

Do you remember Opening of Willunga Railway ? Then Join up and add your memory here.

This page was last modified on 12 April 2019, at 11:35.Text on this site is available under the Creative Commons Attributions/Share Alike licence; additional terms may also apply. See our Terms of Use.
About Now and Then | Places | People | Events | Organisations | Things | Contact us