Abel William Parker (known as William Parker) was born on 14 November 1836 at Southwark, to his parents George Parker, whitesmith [tinsmith] and Ann Parker (nee Snart). He was the second youngest of seven children. After William left school, he became an errand boy, where he would have delivered goods and messages for shopkeepers.

On 7 December, 1855, Marco Polo left Liverpool with William and his brother Edwin on board. Both young men are listed as “railway couriers” with berths probably in steerage. The ship arrived in Melbourne on February 26, 1856. The next day, they boarded Havilah, an iron screw steamer that delivered them to Port Adelaide.

From Port Adelaide William and Edwin make their way to Mr Wilson’s farm at Port Willunga. William is then joined in Port Willunga by his brother Charles and sister-in-law, Mary in 1858. They travelled on the ship, Sir Thomas Gresham, working to earn their passage. They brought with them a young woman called Emma Edwards who William marries in the St Stephens Anglican Church, Willunga on April 28, 1858. The speed of the marriage indicates that the marriage plans had been formed before William had left his English home.

Later in September 5, 1858, William had to break the news to his mother that Edwin had died at Port Willunga when a boat capsized on which he was a passenger. Edwin left a widow and an infant.

William had a rich life in Aldinga. He was a member, and at one time, the Grand Master of the Ancient Order of Foresters, Court Lodge, Aldinga. He was also a musician and an active member of St Anne’s Anglican Church at Aldinga.

In or after 1870, William decides to try his hand at carving gravestones. William has one gravestone in each of the cemeteries at St Anne’s Aldinga and the Aldinga Methodist (now Uniting) Church. In the Uniting Church, the gravestone has been raised for Maria Ann Simmons, the wife of George Simmons. The other gravestone, at St Anne’s, was for Dr James F. Knipe, a popular medical practitioner.

In the evenings, William studied. His studies helped him gain more prestigious positions. In December 1879, besides being the Postmaster of Aldinga, becomes the Collector of Jetty Dues at Port Willunga. He is then briefly appointed as Bailiff of the Local Court of Willunga, but then resigned when he left the District.

William was appointed Town Clerk for the Corporation of Thebarton in 1884. He sold his farm at Sellick’s Hill and moved with his family to Thebarton. William stayed at Thebarton until 1905, and then resigned to move to Western Australia. William died in 1912 at his home at East Cannington, Western Australia.

Taken from: Fragments of Time: The Lives and Works of the Willunga Slate Carvers 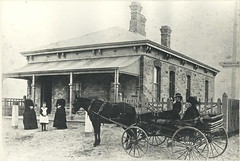 Do you remember Parker, Abel William ? Then Join up and add your memory here.

This page was last modified on 22 December 2019, at 13:54.Text on this site is available under the Creative Commons Attributions/Share Alike licence; additional terms may also apply. See our Terms of Use.
About Now and Then | Places | People | Events | Organisations | Things | Contact us